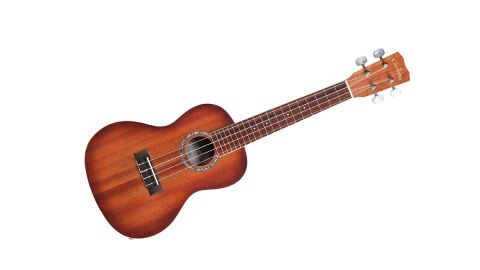 Decent but not great; needs a little more to wow the player.

Cordoba Guitars sounds like a traditional Spanish luthier, and indeed it employs some Spanish master-builders, but in fact the company, established in 1997, is headquartered in the USA, and a number of models are hand-built in China.

It makes nylon and steel-strung guitars at various price points, and like many makers, has added some ukuleles to its range as well. All this is obviously par for the course, but with an instrument that has a strong national origin such as that of a ukulele, these considerations are, if not crucial, important, when submitting a review.

This concert model (the concert designation refers to the scale length, which is intermediate between the traditional soprano and the tenor) is of all-laminate construction, with a mahogany veneer.

Laminate has no real sound of its own; there are many different types, ranging from the sort of plywood you might pick up in B&Q to materials designed with tone in mind, but you have to try it to find out. There are some tonal assumptions that go with laminate: lots of direct fundamental with not much sympathetic harmonic content, and often, loud punchy tone.

The top is stained with an attractive and subtle sunburst which looks almost cherry in certain lights, with the edges nowhere near as dark as you might normally expect in a mahogany top. The top is bound with single-ply cream plastic, but the spiff quotient is raised by the fancy abalone rosette inlay. Back and sides are also of mahogany veneered ply - without the sunburst, but still attractive - and bound again in cream plastic.

There’s a simple rectangular bridge with an uncompensated plastic saddle, and at the north end of the neck, a plastic nut. The 19-fret neck (the website confusingly claims it’s 18, but no amount of recounting got us down to that figure) is of mahogany with a rosewood fingerboard, and is again bound, topped with a subtly two-pronged headstock, and a silk-screened Cordoba logo. Hardware wise, there are simple open back tuners with plastic buttons (undoubtedly budget items, but they do their job just fine) and a carefully- hidden pickup system.

Eschewing the large preamp unit which occupies so much of the minimal body space of many ukes, Cordoba has opted for a passive undersaddle piezo with a volume control hidden in the soundhole. It’s not uncommon to find that the sheer amount of electronics can impact on the acoustic tone of ukes, which is unlikely with this much lighter and less intrusive system, but the lack of a tone control may be a limitation, and some sound people may have trouble getting sufficient level.

Be prepared for the possibility of needing an external preamp. The jack socket is set directly into the side, again with no battery box or cover plate, which can look cheap.

Many less expensive ukes have quality problems, but none are evident here; the frets are well seated and not sharp, intonation is good right across the board, and while it’s possible to bend notes sharp by pressing too hard, it’s well within the tolerances you would expect. It’s a pretty attractive uke too; perhaps a little me-too, but the sunburst finish stands out from the crowd. There is nothing to be ashamed of here.

With regards playability, let’s address the issue of materials first; while it may be true in a general sense that solid woods are better, we have seen some utterly outstanding ukes made entirely from laminates, and some rather unprepossessing all solid instruments.

The Cordoba is a relatively quiet instrument; the sustain is fairly short, and the tone doesn’t have a lot of punch to it. It’s a mellow tone, quite jazzy even, with a bias to the mid, but not so much top end. Strumming is rewarding enough, if quiet; the string-to-string balance is excellent and the chords ring together harmoniously. Picking, however, is less pleasing; the combination of minimal attack and little sustain means that notes don’t ring on when you want them to, and the overall feel can be a little dead.

Play the top two strings and move up the scale for treble, and there’s not much complexity to the tone: it’s simple, direct and quiet, on the verge of muted. The midtones and bass (as much as there is bass on a high G uke) are more pleasing and rounded, but there’s still none of the harmonic content that would make it really pretty. It’s easy to imagine playing this uke acoustically in a large ukulele group, but for playing around the kitchen table, it just didn’t light our fire sufficiently.

Plugging in, however, was a different story. The natural pop and percussiveness of the piezo is the perfect foil to the somewhat muted acoustic tone, and the result is something really quite well balanced and very usable. The output isn’t as loud as an active system would be with the volume all the way up, but it was perfectly acceptable with all the amps we tried, and should be enough to go direct into a PA system with a decent DI box.

If you’re a virtuoso fingerstyle player this is still not going to be the uke for you, but not many will be at this price point. If you need a uke to switch to in a band set, or you want to plug in and take the lead in a big uke group, it’ll do the job well.

The lack of strap buttons is something of a limitation if this is to be a stage uke, and it’s unclear why you wouldn’t fit an endpin jack built into a strap button, but it’s a good amount of instrument for the money. The benefit of the relatively weak acoustic tone is that you can dig in and drive the top really hard without fearing breakup or a loss of control through the pickup.

This isn’t a category killer, but it’s far from a bad instrument. If all your playing is acoustic at home, this is probably not the ukulele for you; try plenty, and you can find one which really sings for the same price or less.

If your main priority is plugged in tone, however, this could well win a place in your heart. It’s good looking, and no doubt different enough to grab the eye of many, and it does
a great job plugged in. The lack of a preamp keeps the weight down and the resonance up, and the tone achieves a balance and usability that’s not quite there acoustically, which makes this, overall a persuasive package.

If your local shop is carrying these, don’t turn it down until you’ve plugged it in; the bold pickup choice and looks may just be a winner for you. It’s a conditional recommendation, but a recommendation nonetheless; this uke can do a job for you, just not every job.