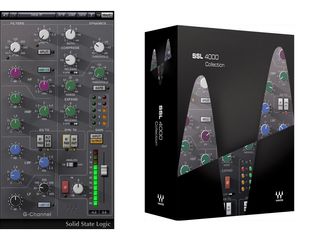 There are now four plug-ins the SSL 4000 Collection.

When Waves released its SSL 4000 plug-in collection, if offered most of the power of the original SSL 4000 console, but not quite all of it. However, this situation has now been sorted out with the addition of the G-Channel.

This new plug-in consolidates the EQ and dynamics controls from the SSL G Series into a single processor. The EQ module promises to deliver pre-boost dip, pre-cut rise and broad Q for extreme frequency manipulation, while the Dynamics section offers soft-knee compression and limiting, a gate/expander and automatic makeup gain.

The G-Channel joins the original three plug-ins in the Waves SSL 4000 Collection - SSL E-Channel, SSL G-Master Buss Compressor and SSL G-Equalizer - and is available as a free update for users who have Waves Update Plan coverage. The full bundle costs $2000/$1000 in TDM/native formats.

In other Waves news, the company has announced the release of its version 6 software. This is said to improve the user experience across the product line. You can find out more on the Waves website.