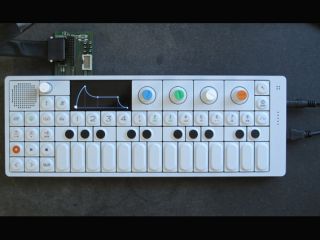 Teenage Engineering OP-1: please tell us we can play it now.

Teenage Engineering's OP-1 is the product that everyone wants to see and hear in action, but so far, all we've been able to do is look at it and study its specs.

That could be about to change, though, as TE has released a pic that shows its new mini synth/controller plugged in and possibly ready for action at the 2010 Winter NAMM Show.

The design looks fundamentally the same as the one that was debuted at the 2009 Frankfurt Musikmesse - the company says that the green PCB sticking out of the top is a 'debug board' that's used when programming the OP-1 during development.

MusicRadar will definitely be swinging by the Teenage Engineering stand once the show starts - look out for more details from Thursday.