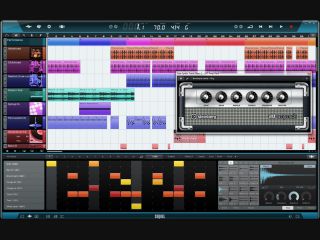 Steinberg has released Sequel 3, a new version of its entry-level music making software.

The package sits underneath the Cubase range, offering a friendlier interface and an easier workflow. However, version 3 adds several features that look set to make Sequel significantly more flexible.

First up, Steinberg has finally added VST support, opening the door to the use of third-party plug-ins. Its omission in past versions has always been something of a mystery, but at least it's finally here. UPDATE: It seems that only VST 3 plug-ins are supported, which does limit compatibility somewhat.

Other new features include the Beat Page, which is powered by the Groove Agent One 'drum station' and is designed to help you with your beat creation, and a performance mode that assigns different sections of your song to trigger pads.

Finally, Sequel now detects the tempo of imported MP3 files, making it easier for you to go about the process of reworking them.

Sequel 3 is available now from the Steinberg online shop and costs £67.76. The update from Sequel 2 costs £25.40. Read on for the official press release.

Steinberg Media Technologies GmbH today released Sequel 3. Designed to meet the needs of entry-level computer music enthusiasts, Sequel 3 is an easy-to-use music software application for recording, editing and mixing. Its instruments and effects, plus the included arranging and performance features, turn Windows and Mac computers into streamlined production studios that cater ideally to the user's degree of sophistication.

For anyone interested in getting to know the ropes of computer music production, Sequel 3 is the ideal tool to start out on this endeavor. Providing versatility through its feature set and high-quality content as well as intuitiveness owing to its one-window design make Sequel 3 the all-in-one solution for songwriters, composers and producers of different music styles.

"With Sequel 3, we're providing a powerful audio and MIDI sequencer that makes creating music an intuitive and enjoyable experience. Offered at a price point affordable for everyone, Sequel 3 adds many editing tools, effects and content to both its timeline-based recording and pattern-based performance modes. Plugging into Sequel with your keyboard, mic or guitar lets you start jamming within minutes," commented Matthias Quellmann, Steinberg's product marketing manager for Sequel.

The Performance Mode turns Sequel 3 into a live tool for creating impromptu arrangements and live mixes by triggering the 24 live performance pads with song sections and variations.

Sequel's one-click tempo detection is a great tool when it comes to working with rhythms of varying tempos. In Performance Mode, this feature can be used for creating remixes.

Another highlight is the VST Amp Rack SE virtual effect board in Sequel 3. Its more than 120 presets comprise combinations of amps, speaker cabinets and effects pedals, delivering a collection of various guitar sounds.

AudioWarp includes the acclaimed élastique Pro engine by zplane for high-quality time-stretching and pitch-shifting to adjust tempo and tone in stunning audio quality.

In its third incarnation, Sequel is now featuring multi-take recording. MIDI and audio can be recorded over and over again. The best take is picked from the list of recorded takes when in Take Mode.

Another new feature is the Step Envelopes Editor which allows the user to add effects to selected parts of the audio material. Reverse, decay or pitch effects are only a few of the many adjustments users can easily make to their productions.

Sequel 3 is available immediately as download version and boxed version through the Steinberg Online Shop. The exact time of availability of Sequel 3 at certified Steinberg dealers is subject to regional variations.

A trial version of Sequel 3 is available through the Steinberg website.

Features at a glance