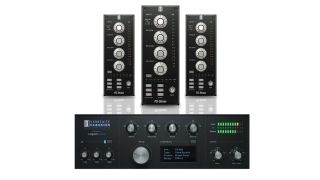 As well as collaborating with D16 on Repeater, a new delay plugin, Slate Digital also has two new solo projects to tell you about: the FG Stress and VerbSuite Classics plugins.

The first of these is an emulation of the Empirical Labs Distressor, a studio compressor that was released to great acclaim in the '90s. Designed to give you the sound of many classic compressors yet possessed of a sonic character all of its own, this versatile unit has apparently been requested by many Slate Digital customers. FG Stress emulates all the details of the hardware, including the special Opto and Nuke modes.

VerbSuite Classics, meanwhile, takes 40 years' worth of digital reverbs and packs them into a single plugin. This uses LiquidSonics' Fusion IR technology, which promises to recreate the evolving character of modulating digital reverbs and give you a smooth and dynamic tone.

Both new plugins will be released for PC and Mac in VST/AU/AAX formats. They'll be available on a subscription basis as part of Slate Digital's Everything Bundle, with VerbSuite Classics also offered as a standalone purchase for $199.