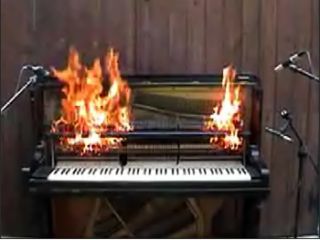 You'll soon be able to find out what a burning piano sounds like.

We´ve already briefed you on the basics of Spectrasonics´ forthcoming Omnisphere - now the company has released a video that reveals how some of the synth´s more wild and wonderful sounds were created.

Omnisphere is a huge new virtual instrument that features not only enhanced versions of all the sounds from Spectrasonics´ Atmosphere, but also a selection of new patches that are based on what the company is calling ‘psychoacoustic sampling´.

Many of these tones are genuinely different to anything we´ve heard before. Ever wanted to play the sound of a filament in a lightbulb? Omnisphere lets you do it. Have you longed to know how a clothes horse connected to two acoustic guitars would sound? You´ll soon be able to find out.

The video runs for just over 15 minutes and provides an entertaining insight into some of the techniques used in Omnisphere´s creation. As well as the ‘instruments´ listed above, you´ll also see a musical typewriter, an orange being rolled round a Tibetan singing bowl and the spectacular burning piano. It´s quite a ride.

The video (and others) can be viewed on Spectrasonics´ Omnisphere preview website. The finished product will be released on September 15 2008 in VST, RTAS and Audio Units formats priced at $499.