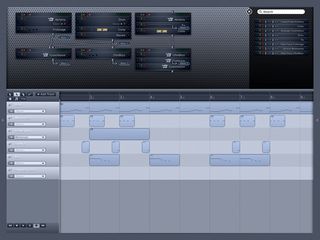 A multitrack project in Ohm Studio.

Ohm Force's Ohm Studio, a new collaborative music platform, has been buzzing around our radar for a while now, and the release of new information and videos has served to ramp up our interest levels considerably.

The basics are these: Ohm Studio runs standalone on your Mac or PC, but projects are stored on the Ohm servers, and you can collaborate with others via the power of the web. There's also a community element so that you can search for other musicians to work with.

While the Ohm Studio interface makes the software look something like a traditional DAW (no bad thing), Ohm Force is at pains to point out that "the rule book was put aside" when it was being designed. So, plug-ins are soft routed to MIDI patterns, meaning that you can have different patterns sending notes to different synths on the same track.

Ohm Force has also put its own spin on automation and the piano roll concept; to help illustrate how Ohm Studio will work, it's just released six teaser videos that demonstrate some of its features.

You can watch these on the next page - if you want to try the software for yourself, go to the Ohm Studio website and sign up for beta testing. We'll let you know when there's a price and release date and, once it's complete, we'll report back on how well Ohm Studio actually works.

Our piano roll rocks. And rolls