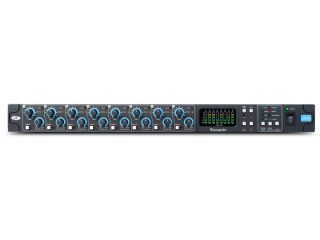 Each of the OctoPre MkII's channels has Each channel has a VCA-based compressor.

Each channel has a VCA-based compressor which has been tuned by ear to model the sound of the legendary Focusrite Red 3. When designing the circuitry, Focusrite accurately matched the shape of the Red 3's knee, to ensure the characteristics of the studio classic were captured. You can use the compressor to provide a clean, controlled sound, or, using the 'more' switch, it's possible to transform the behavior of the VCA, doubling the ratio to deliver and invigorated effect compressor.

The preamp circuits are the same as those found in the Saffire PRO range of high-quality audio interfaces. As expected from all Focusrite preamps, these have an especially fast transient response and tolerance for high SPLs, as well as an unsurpassed, transparent sound.

On-board digital converters, with state-of-the-art clocking and jitter-elimination technology, enable you to stream eight channels of 24-bit/96kHz digital audio to and from an ADAT-equipped computer workstation or hard disk recorder. This makes it the perfect addition to your project studio setup or live recording rig, including those running Pro Tools M-Powered, LE and HD, as well as the likes of Logic, Cubase, Sonar and Digital Performer.

The A-D and D-A converters can operate at common sample rates of up to 96kHz, with dual TOSlink ports carrying the SMUX-compliant ADAT signal to and from your audio interface, mixing console or hard disk recorder. When running at 44.1kHz or 48kHz, the twin outputs are mirrored, so you can feed two ADAT-equipped devices — a computer audio interface and a backup recorder, for example — with the same signal.

In short, the OctoPre MkII Dynamic is the best-equipped, most comprehensive eight-channel mic pre on the market: Eight signature Focusrite mic preamps; Eight Red 3-derived compressors; World-class digital I/O: All in one box and within the project studio budget.