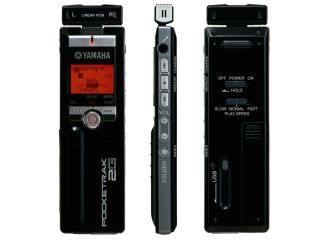 The Pocketrak 2G is slim and lightweight

The unit weighs only 49grams, and at 13mm thick, the Pocketrak is ideal for quickly recording rehearsals, or for getting down ideas when you're on the move. File formats on offer range from 32kbps mono MP3 to CD-quality PCM, and, if plugged-in, the 2GB capacity facilitates an impressive 35 hours of continuous recording in standard 128kbps MP3 mode. Unplugged, the battery lasts up to 9 hours.

The Pocketrak boasts a stereo microphone with a 'tilt-up' function, which allows you to tilt the mic to avoid surface reflections if the recorder is lying on a table. Other practical features include a loudspeaker, a line input, and automatic record level control (although record level can also be set manually).