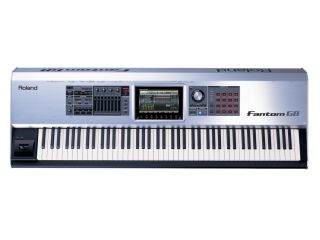 Computer-free music production is possible with the Fantom-G8.

Roland has updated its workstation line-up with the Fantom G. This comes in 61-note (Fantom-G6), 76-note (Fantom-G7) and 88-note (Fantom-G8) configurations and is one of the first products to make use of the company's new SuperNATURAL tone generation system.

SuperNATURAL is driven by a new audio processor and promises to deliver much more expressive and authentic sounds. In addition to this technology, the Fantoms also feature an ARX expansion slot which enables users to bring further SuperNATURAL soundsets to the party.

A powerful new sequencer is also part of the Fantom-G's make-up. This supports 128 tracks (24 of which can be audio) and can be controlled with a standard two-button mouse. The 8.5-inch wide screen, meanwhile, is sure to aid usability.

It should also be noted that the Fantom-G8 features Roland's flagship PHA II 'Ivory Feel' keyboard technology for a piano-like playing experience.

Prices and release dates for the Fantom-G workstations are still to be revealed. Further details can be found on the Roland website.