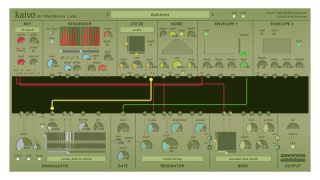 Randy Jones is the man behind soft synths Aalto and Kaivo. We chat to him about the past and the future of sound generation.

How did you get started in music, and in programming?

"It all started with a VIC-20. That's the little computer my family got when I was still in grade school, and what I first learned programming on. So from my family I got that, and also access to a pretty diverse record collection that exposed me to a lot of interesting music. The records I tuned into most - and the ones I went to the library to find more like - tended to be things like jazz and electronic.

"Work-wise, I've done some other stuff along the way, but essentially, I'm back to where I was at the age of ten, using computers to make weird sounds."

Aalto and Kaivo share a similar look and layout. What influenced the design?

"It was around three years from my first sketches of UI to the first release of Aalto. The main innovation that resulted was the scope dials, which let you both manipulate a signal and see its history with the same geometry. I think they use space well, which is always something to consider in a plugin.

"In terms of usability, I took in a lot of influences, from airplane cockpit displays, to Max/MSP, to the writing of Don Norman."

Kaivo is capable of producing both realistic and unrealistic sounds/textures - what's responsible for its range? Do you think physical modelling will get good enough to replace sampling?

"Physical modelling can make incredibly malleable sounds that transition smoothly from the familiar and recognisable to the totally synthetic sounding. It's this boundary-breaking I find most exciting, and I hope Kaivo is a good tool for exploring brand new sonic territory. For emulating most traditional instruments, I don't think sampling is going anywhere soon, though a few instruments such as the piano that really lend themselves to physical modelling provide counterexamples."

Any predictions for the future of sound synthesis?

"There are plenty of ideas from physical modelling that we're nowhere near able to implement in real-time. So there's a kind of inexhaustible well there. I think we'll also hear some new sounds based on 'big data' approaches - Music Information Retrieval techniques applied to lots of source sounds, with an interface for navigation."

Tell us a bit about your Soundplane controller.

"My goal with the Soundplane is to make a new instrument designed from the ground up to offer a direct and continuous connection to a wide range of musical sounds. Each touch gives independent feedback of X, Y and pressure data a thousand times per second. And it's easy to learn. Sort of like a guitar, the pitch relationships are the same in each key."

What's next from Madrona Labs?

"Right now I'm gearing up for another run of Soundplanes, as well as adding some requested features to the existing software. After that I get to work on the next plugin, which will be a new kind of beast: part synthesiser, part effect. Please stay tuned!"