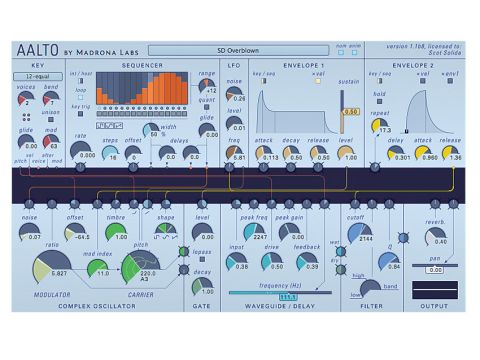 Aalto is aimed at those with a penchant for the unusual. It sounds splendid but may put the hurt on your CPU.

Aalto is brimming with features that provide an alternative to common methods of sound design, composition and performance. It's a semi-modular instrument, so it offers a fixed number of synthesis components, but these can be freely patched together.

Right from first launch, it's obvious that we're in new territory here. Aalto's GUI is divided into two sections. The top half of the interface sports most of the modulation and control sources, while the lower half provides oscillator, filter and other audio-level modules.

There's a black band across the middle peppered with tiny knobs and coloured dots, and this is where all of your patch connections are made. The dots are signal outputs, while the small knobs are both inputs and the control by which you set the amount of signal to pass to the target.

To make a connection, you drag from a node to a knob to create a virtual patch lead. Multiple cables can be routed (and summed) to a single destination. The Amount dial will then multiply the input by the dial's value.

At first glance, you might think that the signals flow only from the top of the interface to the lower half, but there are quite a few input points up top as well.

When the going gets weird

Aalto's unusual Complex Oscillator is based on a legendary vintage oscillator, inspired - at least in part - by Buchla's 259 Complex Waveform Generator.

Thankfully, it's not quite as complex as the real deal! You're provided with both Modulator and Carrier oscillators, joined at the middle by a Mod Index knob - yep, we're talking basic frequency modulation (FM) synthesis here.

Unusually, control signals are sent to the Mod Index through a multistage low-pass filter that emulates the response of a Vactrol-style opto-isolator (an LED driving a light-dependent resistor).

There's a Timbre dial that mimics Buchla's wavefolder circuit, and tweaking this adds harmonic richness (and weirdness) to the sound. A Shape control enables you to dial in waveforms from square to sine to saw, as well as anywhere in between.

The Complex Oscillator spits its signal through a Gate module. This is another nod to Buchla in that it includes a mode that enables low-pass filtering along with amplitude attenuation. This is useful for a range of timbres, but is probably most applicable to percussive patches.

Like the Oscillator, the Gate mimics a Vactrol's response, and there's a Decay knob to control how quickly it closes.

Still wallowing in the unconventional, we turn to the Waveguide/Delay section, which offers a delay line with a peaking EQ and a waveshaper. It's a variation on the combo that's widely used in physical modelling synthesis and, accordingly, you'll find a few presets that draw on this section to make rudimentary woodwind or plucked string sounds.

By using longer delay times, you can also tap into this section for standard delay effects.

While we're grateful for all of the weirdness, it's nice to see that Madrona have included some more familiar functions, too. There's a lovely resonant multimode filter for one, and it takes its cues from Oberheim's SEM filter. You get three modes: high, band, and low-pass. The sound itself is oh-so-analogue.

At the output section, meanwhile, you've got modulatable pan and a reverb section for added ambience.

The upper half of the GUI is less likely to confuse. To the left, you can route pitch, aftertouch, mod wheel and velocity messages, and there's a Voice output that sends a signal proportional to the number of each voice.

Unison and glide are provided, and you can adjust bend, range and the number of voices to be played. Tuning tables are supported, and you can load scala .sci files.

There's a sequencer and an LFO, along with a pair of envelope generators. The LFO is a bare-bones affair and produces a sine wave: that's it. You can, however, add noise to this for more chaotic modulation.

Of the envelopes, the first is a typical four-stage ADSR, while the second offers attack and release parameters along with a pre-trigger delay time and a Repeat function that retriggers the envelope.

What you can't appreciate from our static screenshots is that Aalto's controls are animated, with an additional line displaying the effective post-modulation value in real-time. This helps a great deal in getting a grip on what's going on under the hood.

Seq and ye shall find

It's all too easy to think of a sequencer as merely a method by which a series of notes are programmed and played back. You can do that with Aalto, certainly, yet it provides a number of features that set it apart.

The sequencer generates both pulses and values. The former are used to trigger other events, such as envelopes or the Gate, while values are used for modulation. They might be routed to pitch or filter cutoff, or even LFO rate.

The sequencer can be clocked internally or to the host. Up to 16 steps are provided, and you can adjust the width of the outgoing pulses. Each step can be toggled on or off via a row of square cells just below the value sliders. The sequencer can be re-triggered via MIDI note-on commands.

There's a built-in quantiser that, when activated, locks the output to the currently selected tuning table. The sequencer even has built-in glide, and you can delay both the pulse and value by up to eight steps. Oh, and there are three waveform buttons that snap the sliders to a preset shape.

Madrona Labs are going out on a limb here with an instrument that can at first seem intimidating, though, really, it isn't too hard to grasp. It sounds rich, evocative and wonderfully weird at times.

Like the hardware that inspired it, Aalto can surprise even veteran voltage jockeys and that, in our books, makes it a winner.

Those looking for huge supersaw sounds or phat bass tones might as well look elsewhere. However, if you got into synths because you wanted to explore new sonic territory, Aalto could be just the ticket. Finally, note that a Windows version is scheduled for February.

Now listen to our audio demos to hear Aalto in action: