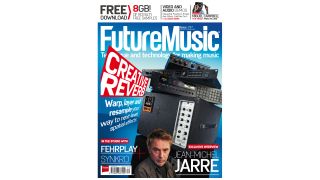 Reverb - it's one of those stock effect types that we all own and all use regularly. It's hugely rare to get through a project without turning to a reverb processor at some point, be it to smooth out the rough edges of a sound, gel elements together or simply to add a sense of space to a track.

Once you get to know your chosen reverb tool, it's easy to apply it on auto-pilot, but step out of your mixing comfort zone, and there's a whole world of unique spacial effects out there. That's what this issue's Creative Reverb cover feature is all about - exploring the sonic scope of applying and processing reverb in unusual ways.

Don't miss the accompanying audio examples too, which can be downloaded - along with the rest of this issue's video, audio and samples - from http://vault.futuremusic.co.uk.

There's still time to enter our massive backline competition too. In conjunction with our sister magazines, we've rounded up a huge bundle of music gear worth over £14,000, including synths, software, interfaces, monitors, guitars, amps, drums and loads more!

Jean Michel-Jarre - Famed for 1976's multi-million selling Oxygène, Jean-Michel Jarre is still innnovating. We visit the synth legend in his studio in Paris and discover the story behind new double album, Electronica

Fehrplay - We track Fehrplay down, both in Ibiza and his New York studio, to find out how he makes his massive tracks

Producer's Guide To... Logic Pro X 10.2 - Get to grips with the sonic power of Alchemy and the rest of the new features in Logic

Sticks, Rims & Knocks - Tight snares, rimshots, sidesticks and found sound thuds. A treasure trove of one shots to freshen up your beats!

PLUS: Access the FM sample archive! - Download the 'Archive' packs and get over 8GB of loops, hits and instruments from our back catalogue of high-quality and royalty-free samples. From vintage synths and drum machines to esoteric instruments and FX - think of it as our best of. All the samples you need to create great music!