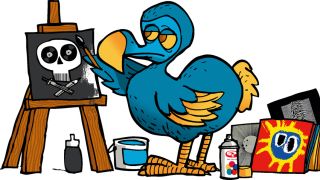 Were it not for the fact that it's already extinct, this bird might soon be out of work.

With the recent problems faced by HMV, the UK's last remaining high-street music retailer, a lot of us have been reflecting on how the way we purchase our singles and albums has changed.

Whereas once it was all about browsing through racks of vinyl/CDs (delete as applicable), these days, the majority of us either order physical copies of music releases via the internet or, increasingly, simply buy them to download as MP3s.

The most significant ramifications of this change have been well-documented - a loss of revenue for the music industry thanks to piracy and the closing of record shops being the two most notable - but the shift to a culture of downloading has influenced not only how we purchase our music, but also, perhaps, which music we actually buy. The death of the album has long been predicted, for example - who needs filler when you can now download just the killer tracks individually? - but there's also the question of whether music artwork is still relevant.

Now, some might argue that the golden age of the album cover has long gone anyway (if you've never waxed lyrical about a gatefold sleeve, then you probably missed it), but as long as there were a significant number of shops selling CDs, it still had some kind of influence.

These days, however, you're far more likely to seek out an album or track to download based on a recommendation or having heard it already, so does its accompanying artwork really have any relevance?

Jay Aquasion of US drum 'n' bass labels Textures Music Group and Soul Deep Recordings has mixed feelings on the matter. "I don't think album or single artwork is as important as it once was with regards to the digital music culture today," he says.

"Although, having artwork for a physical release of an album or single is a different animal, and I do agree with using artwork in these situations. All physical product you will see from Textures Music Group and Soul Deep Recordings will have artwork for this reason.

"The philosophy behind using the Textures Music Group logo as the cover art for the digital releases is that, with artwork, it's hard to distinguish which label the release is from at the glance of an eye. Most people don't read the small text where the label's name is written on the leading download sites in the digital market.

"With Soul Deep Recordings, we initially did the same to create recognition with the brand, using no artwork. It worked well, but then the label switched to using artwork, and it's been unbelievably well received. If the shoe fits, wear it.

A more committed advocate of music artwork is Brazil-based LuvDisaster Records' Oliver Ferrer. "The cover was always important on physical products, but in the digital market it is still important - it should just be more simple. Most digital stores use only thumbnails of the covers, so the art for the digital market should be based on this. It's no good having beautiful artwork that works well in a large size if the sites only use it small."

Think little, then, is the takeaway message, but how important is it that, even if they don't generate unique artwork for every individual release, artists have some kind of visual identity? A logo or photo that they can use across all releases and social media channels, for example?

"The look is very important," says Oliver Ferrer. He believes that some kind of 'branding' is "an important supplement that reinforces the message of the artist […] and complements their work".

Jay Aquasion takes a similar view: "I strongly feel it's important that artists still have some kind of identity. Too many artists are attention whores and don't have a personality behind their music that people can buy into. This is another big reason why many new artists fail early on.

"As for using their logo on label artwork, I'm personally against it unless it's on a physical release as I mentioned earlier. Artists using their logo on social media channels, however, is an excellent idea, and I highly recommend focusing on building whatever brand or logo you have."

Having some kind of consistent visual message is probably still important, then, but could the fact that we're no longer judging books by their covers - or, more specifically, musicians by their artwork - actually be a good thing?

A lot of up-and-coming artists complain that being a successful musician is more about marketing than it is tunes, but is it now easier for the music to speak for itself and succeed or fail on its own merits, or does the demise of album artwork mean that there's a danger that artists will become more anonymous?

"I don't think it's necessarily a good thing or a bad thing, but the digital market has changed the way we invest in the process of releasing music," says Jay Aquasion. "Back when artwork was part of the norm, labels invested in physical merchandise that couldn't digitally be copied and transmitted around the world. But if it doesn't make dollars, it doesn't make sense.

"I agree that it means that music has to speak for itself. If you look at many of the artists that debuted on Textures Music Group, the ones that had a good support system behind them, or the ones that stuck with us, all went on to do big things. [A lack of artwork] only makes an artist anonymous if the music is lame, there's a lack of commitment or consistency on the artist's part or the artist doesn't have a good support system behind them."

As a keen evangelist of artwork, it's no surprise that Oliver Ferrer still considers it to be extremely important: "It is very dangerous to think that the music alone will do the sales job - getting fans goes far beyond that. I think that only a complete work will truly captivate your customers."

It seems likely that artwork will still have a role to play as the music business re-shapes itself, but it's debatable whether or not artists and record companies will continue to invest heavily in it.

For those individual artists who want to create their own visual identity, Jay Aquasion has some final words of wisdom: "The best advice I can give to anyone wanting to use artwork is to find someone who is a qualified graphic designer and arrange for them to design all of your artwork so that you maintain consistency with the designs."

This article originally appeared in issue 190 of Computer Music magazine.