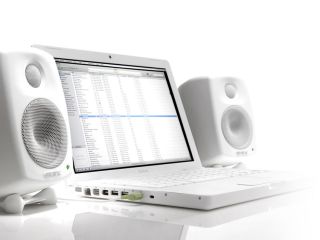 Genelec's 6010A speakers are its smallest ever

Genelec has announced its smallest ever active speakers, the 6010A. The two-way speakers, designed to function as everything from nearfield monitors to a portable speaker system, stand just 18cm tall, some 5cm shorter than Genelec´s previous smallest speaker, the 8020A.

The 6010A features separate bass and treble drivers (a 3” cone and a ¾” metal dome), each of which is capable of outputting 12 watts of power via the drivers´ separate amplifiers. Frequency response is 73Hz up to 18kHz, with the response flat to within +/- 3dB.

The 6010A has neodymium magnets meaning the speakers can be used close to sensitive computers screens without magnetic interference and the whole lot weighs in at 1.4kg.

Genelec has also announced an accompanying sub-woofer, the 5040A, which is similarly small at just 25cm tall. The 5040A - which sports a 6½” downward-facing driver - can support up to five 6010As, which plug in via RCA connectors and are served through a fixed high-pass filter.

Prices and release date haven´t yet been announced, but you can read more on the 6010A and 5040A on the Genelec website. You can also enter MusicRadar´s competition to win £2000 worth of Genelec gear.