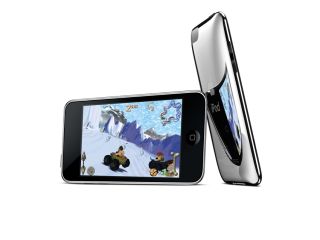 The Galaxy Tour's song was used to promote the latest version of the iPod touch.

Lars Iversen, bass and keyboard player with The Asteroids Galaxy Tour, has revealed that Steve Jobs hand-picked his band's song Around The Bend to soundtrack Apple's latest advert for the iPod touch.

Getting a song onto an iPod ad can give both new and existing bands a massive commercial boost (Coldplay and The Ting Tings also had the honour in 2008), and it now seems that decisions are made at the highest level.

"We have this company working for us in the States called Synch, and they got in touch with Apple," explained Iversen to Songfacts.com. "I think they had this meeting with Steve Jobs himself, and he picked that song out of the bunch and said, 'This is it, this is the new track for the iPod Touch.'

"Apparently he just loved that track, but we never saw it as one of our singles," continues Iversen. "We have some other songs that we thought would be great singles, and that would work cool on the radio, but he really loved that song."

Another advantage for Apple was that, when the advert started airing, The Asteroids Galaxy Tour didn't have an album out and Around The Bend wasn't available as a single. This being the case, the most likely destination for anyone who wanted to buy the track was - you guessed it - the iTunes Music Store.