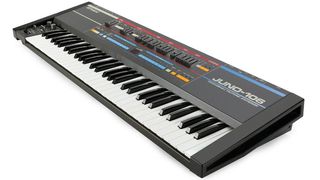 It's easy to understand why some instruments have achieved legendary status. Sequential Circuits' Prophet-5, for example, offered innovative features like polyphony and programmability in a classy package, and even a cursory play on a Minimoog leaves little doubt that it was a performer's dream machine.

Why, though, has Roland's Juno-106 entered the divine synth pantheon? Surely not because it was in any way a comprehensive synthesizer, offering as it did only a single DCO for each of its six voices, an all-too-familiar (if satisfyingly squelchy) 24dB filter and a single four-stage envelope generator shared by filter and amplitude circuits. And the LFO? A laughable affair with a single waveshape. Performance features were similarly anaemic - no velocity functions or aftertouch here, just Roland's favoured horizontally-aligned 'bender' and mod wheel plus a portamento knob.

It's a pretty generic list of specifications, not dissimilar to the many inexpensive polysynths that cropped up in the wake of the Prophet-5. So why the hubbub surrounding the 106? Certainly, much credit could be given to the sound of the machine. The DCO was joined by a sub oscillator that could add a bit of oomph, and the available pulse and the DCO's sawtooth waveforms could be used simultaneously to create interesting hybrids of the two. Roland's dependable four-pole resonant low-pass filter was joined by a simple high-pass, adding timbral variety. Then, too, there was that now-famous Roland chorus circuit, an analogue bucket-brigade design resulting in a thick swirl - the perfect companion to the Juno's noise generator.

Reasonable enough, to be sure, but do such niceties justify the instrument's sustained popularity? Possibly. As any 106 owner will tell you, this is an instrument on which it's easy to learn the basics of synthesis. More importantly, its solid, stable sound provides an encouraging impetus to dig in. Parameters values can be transmitted over MIDI (albeit in SysEx form), and thus recorded into a sequencer or software editor/librarian. The 106's MIDI implementation was partially responsible for the instrument's longevity in the secondhand market.

The Juno-106 enjoyed healthy sales, and it's still numerous enough to be found for reasonable prices. A 'home' version with built-in speakers was also available in the form of the HS-60 (or Juno-106S in Japan). If you can find one, Roland's multitimbral MKS-7 module provides two and four voice channels with nearly identical architecture to that of the 106, with an added monophonic bass synth and a smattering of samples from Roland's TR-707 drum machine. Out of the box, the MKS-7 is a preset-only affair, but most Juno-106 editors will allow you to edit the sounds to your liking. Another bonus? The MKS-7 versions respond to incoming keyboard velocity.

As you may have guessed, the rudimentary synthesis of the Juno-106 is easily replaced by software variants, of which there are plenty around. Like the hardware from which they take inspiration, such clones are excellent synths on which to learn the ropes.

Urs Heckmann's divine DIVA features a choice of vintage-emulating oscillator, filter and envelope modules that can be mixed and matched as you like. DIVA's DCO module was actually inspired by Roland's later Alpha Juno synth, but this plugin is equally adept at aping any one of the Junos, including the 106.

For those of you on a budget and assuming you use Windows, there is the free DCO-6, a spiffy parameter-for-parameter copy of the venerable Juno-106. Like the instrument from which it takes its name, DCO-6 provides a quick and easy answer when you need those spiky basses, swirling pads or piercing portamento lead sounds.

Though not specifically cloned from a Juno-106, TAL-U-NO-LX is based on the 106's immediate predecessor, the Juno-60, which shared a nearly identical feature set with the 106. In fact, with its switches for saw and pulse waveforms and dual chorus options, TAL-U-NO-LX is closer to the 106 than many that claim to be direct copies.