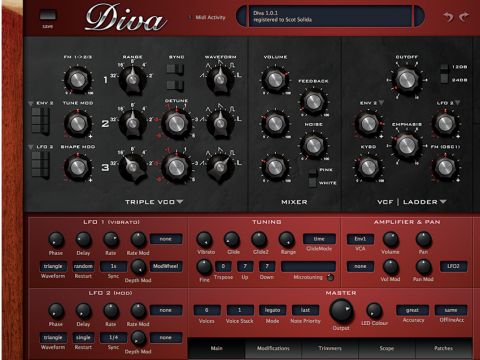 Diva is architecturally straightforward, but it sounds phenomenal and arguably puts paid to the analogue vs. digital debate.

Two or three oscillators, multimode filters, dual envelope generators, a couple of LFOs and some effects. You've seen it all before - or so you might think.

It's true that we've been inundated with virtual analogue synths over the past decade, yet aficionados of vintage synths would have you believe that the beloved classics of yore have never really been matched in software form.

Certainly, there is a limit to the processing powers of even the mightiest PCs, and there is agreement that compromises must be made between audio quality and shaving a few CPU cycles from any emulation. Yet we can't help wondering how much the average user or listener really cares about such details. It's a debate that continues to rage.

With Diva (short for Dinosaur Impersonating Virtual Analogue), u-he may have found the ideal middle ground. It's not a clone of any specific synth; instead it provides elements from various famous instruments, all deeply analysed and meticulously recreated with excruciating attention to detail.

Diva is a VST/AU plug-in for PC and Mac, coming in 32- and 64-bit versions. You'd better have a powerful machine, though, especially if you want to eke the most realistic analogue sound from the instrument. u-he provides multiple playback modes of varying quality, with 'Divine' being themost CPU-intensive.

We tested Diva on two machines: a quad-core i7 MacBook Pro and an older Core 2 Duo model. We experienced crackles and dropouts when playing more than two or three notes of certain polyphonic patches in Divine mode on both machines, though the quad obviously fared a little better.

The CPU overhead is justified by the sound, which leaves us breathless. We compared it with
a room full of vintage analogue synths, and it held its own. Wewere particularly impressed by how well Diva stacked up against a restored Model D Minimoog.

A big part of this superior sound is down to Diva's incredible-sounding filters. These use circuit simulation algorithms similar to those found in software such as PSpice (used by electrical engineers to design and simulate circuits at the component level).

The algorithms u-he uses are tuned for audio, however: they run in real time, and the components have been carefully matched to produce the desired sound (u-he say that software such as PSpice, while giving correct results, is unable to precisely reproduce the sound of specific componentry). u-he says this is the first time such methods have been employed in real-time by a native soft synth.

Diva's structure is pretty standard. The oscillator section can comprise one of four designs. One - Triple VCO - is clearly patterned after the oscillator section of the Minimoog, while DCO is similar to that of the Roland Alpha Juno, offering a sub-oscillator and those fabulously rich waveforms. There are two Dual VCOs, one an economy version and the other with such niceties as sync and cross-modulation.

The filter section is equally familiar. Again, you can choose one of four designs: a Moog-style ladder filter, a cleaner cascade, a multimode design and the aggressive Bite filter.

Envelope generators come in three flavours: Minimoog-style ADS, analogue ADSR and digital ADSR. The latter features quantise 'stepping' as heard on the Oberheim Matrix 1000 and others.

As you can see, Diva is a semimodular synth of sorts, enabling the user to mix and match disparate classic designs. It's a great idea that has its roots in Diva's origins as one of u-he head honcho Urs Heckmann's development tools. We're glad he decided to share!

The lower half of Diva's GUI features tabs to access further sections. Main provides tuning and master controls. Modification offers modulation control, and Trimmers hosts detune, cutoff, envelope 'slop' and other tweaks that impart some of that old analogue magic. Scope provides a display of the audio signal, and Patches accesses the Patch browser.

Of special note is the MIDI Programs folder, into which you can load 128 patches for calling up via MIDI Program Change messages. Slick. Right-click presets to classify them as 'Favourite' or 'Junk'; Junk patches will disappear until you decide to bring them back.

The patches themselves are nothing short of exemplary. We have to confess to being a bit bored with the same old predictable dance, trance and dubstep patches that seem to make up the majority of synth preset lists these days. While those sounds can indeed be useful, we long for the days when factory patches were, well, musical; patches that beg you to put your fingers to the keys and jam.

Diva is loaded with them.

Basses that rip, rumble and resound, but can easily befitted into a mix. Leads that sear, soar and sing, but are tasteful and inspiring. Pads that are deep, rich andfull of subtlety. These patches are presented as musical instruments that let you, the musician, do the playing.

This tabbed section is flanked by a pair of LFOs. They sync, of course, and provide eight waveforms each. Needless to say, there are built-in effects, too: plate reverb, delay, chorus, rotary speaker simulation and phaser.

In other words, Diva's got everything you need to carve out any basic analogue sound, and then some. It's meat and potatoes with added spice, and digging beneath the surface, you'll find plenty of advanced features such as powerful modulation options and per-voice fine-tuning.

It's by no means a smörgåsbord of modularity, though- you'll have to look to one of u-he's modular machines for that. Diva was initially pitched as a "learning synth", but the sound quality makes it much more than that. Sometimes you simply don't want all the bells and whistles - you just want to whip up a quick patch that'll keep the inspiration flowing.

Is it worth 215 bucks? Absolutely. Diva's slick, accessible interface and truly mind-blowing sound make it a fine addition to your synth rack.

Mind you, there is that CPU hit, and if you're trundling along on a years-old CPU, Diva will probably have it begging for mercy from the off, at least in the higher quality modes.

On the plus side, an update is just around the corner that promises multicore support, which u-he say could greatly alleviate the CPU punishment. However, if you have a box with enough grunt, you'd be crazy not to check this one out.