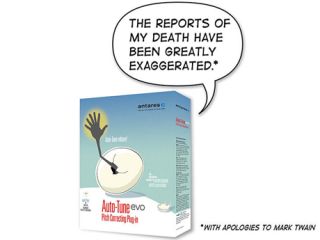 PRESS RELEASE: Antares Audio Technologies today thanked the fans of their professional world-standard Auto-Tune pitch correction plug-in for their outpouring of concern and good wishes in the face of reports of the plug-in's untimely death.

The concerns first surfaced in early June when Jay-Z released his song, D.O.A. (Death Of Auto-Tune) and dominated hip-hop comment on Twitter for a day or so (sample tweet: "I hope no VSTs get their limos shot up over this.").

In a subsequent interview, Jay-Z told a Chicago radio station that it was hearing the Auto-Tune Vocal Effect used in a Wendy's commercial that convinced him that the moment of death had arrived. And now this week has seen the release of the D.O.A. music video complete with slow-motion exploding Auto-Tune boxes.

To set the record straight, we went straight to the source. And the response was unequivocal.