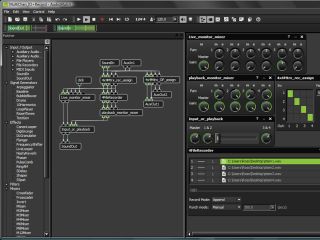 AudioMulch 2.0: there are more new features to come.

PRESS RELEASE: Ross Bencina has released AudioMulch Interactive Music Studio 2.0. After three years in development, version 2.0 of the software introduces new features and brings AudioMulch to the Mac for the first time.

"With the major interface work finished and the Mac version in place I can now focus on new features," says AudioMulch developer and owner Ross Bencina. "I have a long list of features and improvements planned that I'll be rolling out in regular updates following the version 2.0 release."

AudioMulch is designed for musical audio processing, composition, and performance. Itsmodular patcher-styleuser interface promotes an improvisational approach to music making. The softwareoffers a range of built in sound processing and audio mangling tools along with parameter control capabilities that include time line automation, a powerful MIDI control mapping system and the "Metasurface" multi-parameter controller.

After ten years of running exclusively on Windows, entry into the Mac market is a significant step for AudioMulch. The timing could be considered ironic, given that Microsoft featured Girl Talk performing with the then PC-only AudioMulch in their "I'm a PC" ad campaign late last year. Microsoft can no longer claim AudioMulch in their 'cool things to do on PC that you can't do on Mac' category.

Girl Talk himself, when asked to comment on the release of version 2.0, said, "I've used AudioMulch as my primary instrument for every one of my shows over the past 9 years. It has also been a fundamental part of making each of my albums. I can't imagine how my work would have evolved without it."

PC and Mac versions of AudioMulch 2.0 can be downloaded from the AudioMulch website, and trialled free for up to 60 days. A version 2.0 license can be purchased for$189, or as an$89 upgrade for version 1.0 users.