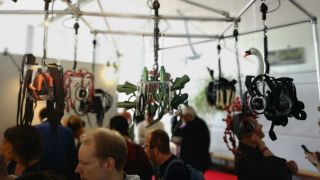 Superbooth 2019: The dust has settled on yet another year of one of the more exciting events in the show calendar, Superbooth.

This particular gear-fest was definitely one of the biggest yet, sure it’s only in its 4th year, but the sheer number of new products was rather astounding. So much so, we couldn’t physically cover it all in the three days.

With the FEZ’s sprawling corridors pitting acid lines against bass-heavy drones and other electro-acoustic noises at every turn, just walking through the event felt like a perverse sonic gauntlet. We found ourselves, at times, fearing for our own sanity as throngs of people bottlenecked, forcing us to soak up a bit too much of the nebulous profusion.

Like moths to the flame, it wasn’t too hard to be drawn into checking out a particular set of frequencies that seemed to resonate within and draw you toward its origins.

Through it all, we managed to take in a cross-section of what the FEZ had to offer and pick some of our best bits from Superbooth, so read on for our favourites from this year’s show.

The standout performer at the show was the Super 6 polysynth from Bristol-based UDO Audio, by a good margin. The specs speak for themselves and obviously, the proof is in the pudding. We just wish we could have multiple helpings and definitely can’t wait to take a closer look at this one.

Following on from the Uno Synth, IK Multimedia dropped the Uno Drum this year and we were mightily impressed. The lightweight form-factor and low price is big on sound, just as the advert promises.

We must admit that the Pulsar-23 from Soma Laboratories could also win this award and we're still kicking ourselves that we couldn't get round to checking it out in the flesh.

Audio headwear that is sure to turn heads will always be winners in our book. Why not make a statement with your headphones, even if that statement is ‘look at me, I have baby dolls stuck to my head!’. We jest, of course, these headpieces are part of a sound installation on the TINRS booth and they actually date back to a NAMM show from the nineties. Still, FM editor, Si Truss does look rather fetching.

We get it, we’ve probably picked one of the most un-sexy products from the show, after all, it is just a power supply. But you have to admit, powering your modular system from a rechargeable power pack is pretty awesome and in just 4HP too.

It’s no secret, as trusted members of the press, that we are privy to some product releases prior to their release. Having said that, everyone likes surprises, right? Having been already in on the releases of the Volca Nubass and Minilogue XD module, we were surprised to see the arrival of the Nu:Tekt NS-1 and it seems we weren’t the only ones. As it turns out, so were the Korg employees at the show.

We might change this one to the ‘Green award’. Big props go out to the organisers of the event, the good folk at Schneidersladen, for recycling last year’s banner with the aid of some skillfully placed gaffer tape.

It’s a rare sight to see Mute boss, Daniel Miller, performing a modular set. It was little wonder, then, that the whole of Superbooth seemed to decamp to the ‘Seaside’ stage. Clearly named for its position as a pontoon on a manmade lake at the FEZ. Miller’s set opened with what could only be described as an auditory rearranging of one’s internal organs, such was the combination of the ambient drone frequencies conjured from his modular rig and a very capable sound system.

Oddball of the show has to be the Motor Synth from the makers of the Plasma Drive, Gamechanger Audio. Using eight electromechanical spinning motors as a sound source is ballsy stuff. Wrapping them all up in a feature-rich desktop synth is genius. It’s instruments like this where the answer to ‘why?’ is always ‘why not?’.

And there we have it, another year and another glance at Berlin's best synth-based tradeshow. If you're already getting withdrawal symptoms, then feast on this: Superbooth 20 has already been announced and will be landing at the FEZ between 23-25 April 2020. See you then!