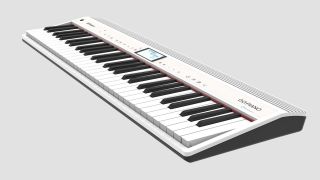 As well as launching an 88-note version of its GO:PIANO, Roland also brought news of a rather more eyebrow-raising innovation to CES: support for Alexa voice control.

Set to arrive at some point this year, this will first be available in the GO:PIANO with Alexa Built-in - a tweaked version of the original product, we assume - but there are plans to expand support into other areas in a bid to introduce “intuitive new ways to interact with musical instruments”.

As far as the piano is concerned, it looks like the voice control will enable you to change sounds and settings as you play, thanks to a new Roland Alexa skill. It’s also being reported that there are tuition elements, with Alexa playing along with you as you learn and providing feedback on your progress.

There will be those who suggest that voice control on a musical instrument is a solution to a problem that no one actually has - we certainly couldn’t see it being of much use in a performance environment - but we’re interested to see what Roland has come up with. More news as we get it.