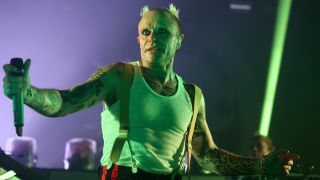 The Prodigy star Keith Flint has died at his Essex home, aged 49.

A band statement confirmed the death earlier today. "It is with deepest shock and sadness that we can confirm the death of our brother and best friend Keith Flint," it read. "A true pioneer, innovator and legend. He will be forever missed."

Band founder and longtime friend Liam Howlett then went on to reveal that the Firestarter star took his own life.

"I'm shell shocked, fuckin angry, confused and heart broken," wrote Howlett on Instagram. "Our brother Keith took his own life over the weekend."

The news is true , I can’t believe I’m saying this but our brother Keith took his own life over the weekend , I’m shell shocked , fuckin angry , confused and heart broken ..... r.i.p brother Liam #theprodigy The Prodigy official

A spokesman for Essex police had earlier confirmed the death: "We were called to concerns for the welfare of a man at an address in Brook Hill, North End, just after 8.10am on Monday

"We attended and, sadly, a 49-year-old man was pronounced dead at the scene. His next of kin have been informed.

"The death is not being treated as suspicious and a file will be prepared for the coroner."

Flint met The Prodigy’s Liam Howlett at a rave club in the late ‘80s, and initially joined the band as a dancer. However, he shifted to vocals in 1996, singing with what would become his trademark punk snarl on Firestarter, a global hit single.

He also performed on the next single, Breathe, and his confrontational look and persona helped to turn The Prodigy into one of the biggest electronic music acts of the ‘90s.

Flint featured heavily on The Fat Of The Land, The Prodigy’s all-conquering 1997 album, and he co-wrote Baby’s Got A Temper, the band’s 2002 comeback single.

His vocals were absent from 2004’s Always Outnumbered, Never Outgunned album, but he did return to the mic on Invaders Must Die, released in 2009. He also pursued several solo and side projects.

Critics, artists and producers from across the music spectrum are expressing their shock and sadness at Flint's death.

Joe Rossitter, editor of Computer Music, said "Like so many music fans of my (jilted) generation, The Prodigy massively influenced my journey into dance music, so it’s incredibly upsetting to hear of Keith Flint’s death.

"His distinctive vocals and image helped the band – and electronic music as a whole – transcend the facelessness of the scene at a time when ‘rave’ was a dirty word. A sad day indeed."

Future Music's editor, Si Truss, also paid tribute. "Arguably more than any other act at the time, in the '90s The Prodigy blurred the lines between dance music and rock, connecting the dots between outdoor raves and the rock-dominated world of music festivals.

"On the production front, they incorporated guitar lines sourced from the likes of Nirvana and Rage Against The Machine in with the usual meld of drum breaks and vocal samples.

"As much as the music itself though, Keith Flint's presence played a massive role in that bridging of genres; from his early days as a live dance through to his re-invention as a vocalist and music video icon, his look, attitude and vocal style owed as much to the Sex Pistols as it did '90s rave fashions.

"As a teenager at the time, that mix of raucous punk energy and hard hitting electronics was massively influential.

"Music for The Jilted Generation was the second album I ever bought, and was the first step on the road of introducing my (at the time) Nirvana-obsessed self to genres like drum & bass, breakbeat and techno."

Absolutely devastated to hear the tragic news that the legend Keith Flint from @the_prodigy has passed away. Our thoughts & condolences are with all his friends and family. We wouldn’t be here if it wasn’t for Keith and the life changing music they made and championed. RIP 💔March 4, 2019

RIP Keith Flint. Very sad to hear the news that he’s passed away. I wouldn’t do what I do without him and The Prodigy in my life. A huge inspiration to me and many others 😔 pic.twitter.com/gXb8cHJGbWMarch 4, 2019

Oh gosh, so sad to hear about Keith Flint, he was always great fun to be around and very kind to Tom and I when we first started doing shows together..great man.March 4, 2019

I just heard, and I am heartbroken. Once the most innovative, fearless, ballsy bands to grace a stage and Keith was perfection up front. We have lost a Titan. 💔 #KeithFlint #Prodigy https://t.co/YJ8knnPi1VMarch 4, 2019

Really sad news about Keith Flint I toured with the Prodigy and met him many times. An absolute gentleman always had fun chatting, he will be a huge loss to the music and festival scene. A true legend and incredible front man for the band #RIPKeith4 March 2019

im proud to have been alive while you were. you and the boys shaped my life, my career and my relationships. im going to miss you ever single day. forever.thank you for everything you gave us Kieth. RIP. @the_prodigy pic.twitter.com/HOnJ0cqX9D4 March 2019