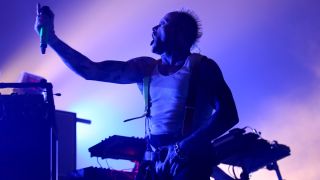 Keith Flint, who has died at the age of 49, was by no means The Prodigy’s driving creative force.

Yes, he was there from the start, when, in 1990, production whizzkid Liam Howlett made his first tape and adopted a name inspired by a Moog synthesizer, but his initial role was as a dancer.

However, by 1996, Flint had become not just the voice of the band, but the face of it, too. Firestarter was the single that helped The Prodigy to break America, but it’s hard to imagine that it would have been as successful without Flint’s looming, Tasmanian Devil presence in the song’s accompanying video.

His punk delivery and appearance were powerful enough to start a Middle England moral panic long before the days of social media and, despite The Prodigy’s huge sales and massive profile, he was probably the only member of the band that most people would have been able to recognise, even at the height of their success.

Although The Prodigy did have another MC, Maxim, Flint brought rock star swagger to the electronic music outfit, with The Prodigy providing a dangerous and often controversial alternative to the comfortingly retro Britpop scene.

His whirlwind antics were in stark contrast to Liam Gallagher’s sullen stillness, and he embodied the spirit of everyone from Mick Jagger to Johnny Rotten.

The Prodigy went mainstream just as computer-based music production was booting up, and the band’s success undoubtedly helped to inspire a whole jilted generation of kids to start making beats in their bedrooms.

Flint’s impact is thrown into even sharper relief when you consider the state of electronic music today. We live in the era of the guest vocalist, where record companies jostle to get their artists featured on producers’ tracks in order to raise their profile and position them for their next career move.

It might be a successful strategy, but we can’t imagine any of Clean Bandit’s gun-for-hire singers keeping your kids awake at night.

Keith Flint was electronic music’s first, and possibly only rock ‘n’ roll frontman. A truly wild fire has been extinguished.