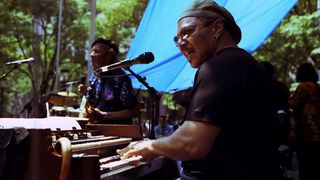 Singer, songwriter, bandleader, pianist, keyboard player and all-round master of funk, Art “Poppa Funk” Neville, has passed away at the age of 81, his manager has confirmed.

Born in New Orleans, Art’s early career was influenced by such RnB artists as James Booker, Booker T. Jones and Bill Doggett, and at the age of 16 joined The Hawketts, who released Mardi Gras Mambo with Neville on vocals.

He then formed the Neville Sounds, with brothers Aaron and Cyril. However, a while after their departure from the band, the ‘Sounds renamed to The Meters who released such seminal funk classics as Cissy Strut.

In the late ‘70s, after the dissolution of The Meters, Art teamed up with brothers Aaron, Cyril and Charlie to form the Neville Brothers, who released the star-studded Uptown and 1989’s Yellow Moon, produced by Daniel Lanois.

The Meters later reformed with a slightly different line-up renamed the Funky Meters, and performed with Art until his retirement in 2018.

Neville is survived by his wife and three children, Lorraine, Arthel, Ian and Amelia, and siblings Aaron, Cyril and Athelgra.

Shocked and heartbroken to hear of the great Art Neville’s passing. What a magnificent artist and person, and a good friend for a long time. My condolences to all his family and let us treasure his memory and music forever. -- Bonniehttps://t.co/dJSmDgtAfj pic.twitter.com/FB6I5DO2thJuly 23, 2019

And now the parade of huge losses in NOLA music continues--RIP the heart and soul of 2 great bands, Art Neville. Some parade--no throws.July 22, 2019

I don’t usually post when someone passes away, but the passing of Art Neville is hitting me harder than usual. He was such a kind-hearted man. The pinnacle of my entire career was sharing the stage with him. Losing him is losing an icon and I’m devastated. #RIPArt pic.twitter.com/6MkCb0oEYpJuly 22, 2019