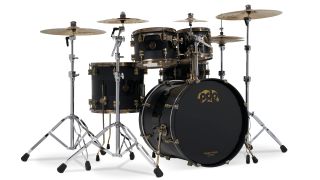 NAMM 2020: It’s hard to believe that it’s been 20 years since DW launched its sister brand, PDP, but time flies when you’re making drums. To celebrate, PDP has announced the release of its 20th anniversary kit and snare.

Both the full kit and snare drum are finished in matte black, with a gloss black stripe as a highlight. Further to this, the shells are fitted with antique bronze hardware and DW’s True-Pitch tension lugs.

Production for both the kit and snare is limited to 2020, and the company is confident both will become collectible items. "We really wanted this 20th Anniversary kit to not only make a bold statement about the look and feel of the brand, we also wanted to show drummers where we’re headed" says PDP Brand Manager Rob Dean.

"We have some really big ideas we’re launching in 2020 and this kit is celebration of that, along with two decades in the marketplace. We’re just getting started.”