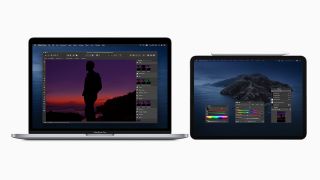 Apple’s recent claim that the latest iPad Pro tablet is “more powerful than most Windows PC laptops” got many music producers wondering about the viability of said fondleslab as a futuristic replacement for their studio Macs and PCs. The appeal is obvious: the iPad Pro is a speedy computer with a creatively inspiring multitouch interface, a jam-packed App Store and unrivalled portability. But there’s much more to consider than just that when assessing its ability to serve as the centre of anyone’s musical universe.

In this head-to-head, we’ll compare the iPad Pro to its most meaningful competition: the 13” MacBook Pro, which is in our opinion the best laptop for music production. (Windows PCs of identical spec are readily available, so almost everything we’re about to discuss is equally applicable to those, too).

The iPad Pro comes in 11” and 12.9” versions (and that extra 1.9” makes a huge difference), with Apple’s A12Z Bionic 8-core CPU inside, clocked at 2.48GHz, and up to 1TB of storage. On its own, it’s a multitouch touchscreen device, but as of the latest version of iPad OS (13.14), it supports mice and trackpads, as well as keyboards, which have long been permitted. Apple, of course, would love you to partner it with their own Magic Keyboard, which features a built-in trackpad. For connectivity and power, there’s a single USB-C port.

The 2020 13” MacBook Pro comes with a 1.4GHz Quad-Core Intel i5 CPU, 8GB RAM, a 256GB SSD and two ThunderBolt 3 (USB-C) ports at the bottom of the range, configurable all the way up to a 2.3GHz i7 with 32GB RAM, 4TB SSD and four ThunderBolt 3 (USB-C) ports. It also incorporates Apple’s infamous Touch Bar – a thin OLED touchstrip above the keyboard that can be customised to house DAW key commands, and is actually quite useful with Logic Pro X, housing transport buttons, Smart Controls, an auditioning keyboard and more.

Performance-wise, the current iPad Pro lands a multicore score of around 4500 in popular benchmarking test Geekbench 5, while the 2019 1.4GHz 13” MacBook Pro (we don’t have the 2020 model at the time of writing) trails that at 3822. So, yes, you certainly do get a lot of bang for your buck with Apple’s sleek über-tablet.

The MacBook Pro is about as iconic as laptop design gets, and although there are thinner, lighter Windows alternatives out there (not to mention Apple’s less powerful MacBook Air), it’s still a perfectly compact, eminently mobile computer that looks gorgeous and is built to last.

That said, there’s no denying the lower weight, smaller footprint and liberating tablet format of the iPad Pro, all of which come together to make it the clear winner in this category. Most pertinently, this differential, plus the touchscreen, gives it a distinct advantage over the comparatively unwieldy MacBook Pro in the live performance arena – check out the amazing multi-iPad-based rig of beatbox doyen Beardyman for a compelling demonstration.

In terms of music making, the most important hardware consideration beyond the internal architecture of any computer is connectivity, and with just a single USB-C port for both charging and data, prospective iPad Pro buyers will need to factor in a hub if they want to hook up audio interfaces, MIDI keyboards, external hard drive, etc. The base level MacBook Pro doesn’t fare that much better, mind, with just two Thunderbolt 3 ports, one of which will spend most of its time connected to the mains for charging and powering. Hubs all round, then.

Incidentally, the built-in ‘studio quality’ microphones and speakers that Apple like to trumpet in the marketing of their laptops and the iPad Pro are fine for Facetime and ‘media consumption’, but wholly insufficient for audio recording and monitoring, and so aren’t a factor in any of this.

Although iPad OS has made great improvements in multitasking and file system access with recent updates, it’s still a world of frustration if you come at it expecting the freedom and flexibility of a desktop operating system like macOS. Whether that matters when all you want to do is make music with it is debatable, but don’t expect iPad OS’s Files app to help you manage those big sample libraries with the immediacy, fluidity and transparency of macOS’s Finder.

For playing and operating virtual instruments and effects, mixers and transport controls, the iPad Pro’s touchscreen has long been a gamechanger, making the indirectness of the mouse pointer seem positively archaic in comparison. However, when it comes to more precise work – negotiating MIDI and audio editors, drawing automation envelopes, etc – we’ll take the accuracy of the trackpad or mouse every time. Up until recently, then, this particular skirmish would have resulted in a draw, but now that the iPad Pro enables both options, it can rightly claim victory.

And if you want to ‘laptop-ise’ it with the Apple Magic Keyboard, you’ll need to fork out another £/$299/£/$349. Still, top-tier iPad music apps are famously affordable, maxing out at around £/$25-30 – although that does reflect their comparatively limited functionality. Which leads us on to…

Here’s where the gap between the iPad Pro and MacBook Pro in this particular creative face-off opens up. Sure, the likes of GarageBand, Cubasis and Auria are truly impressive in their scaling down of full-featured DAWs to Apple’s multitouch marvel, and the ability to run genuine Audio Units (AUv3) plugins in them continues to hint at the potential for parity with macOS and Windows. But the hard truth is that without 1:1 ports of pro-quality essentials such as Live, Cubase, Logic Pro, Studio One, Pro Tools, FL Studio (FL Studio Mobile doesn’t count), Bitwig Studio and all the rest of them, not to mention a dramatic increase in the number of big-name plugins brought over, the benefits in price, tactility and form factor offered by the iPad Pro don’t really justify the compromises and workarounds involved in producing complete tracks from start-to-finish with it. App Store pricing being what it is, it seems unlikely that any of these cornerstone applications will be making their way to iPad OS any time soon, which is a great and showstopping shame.

The iPad Pro finds its niche, though, as a compositional scratchpad, (wireless!) MIDI controller, on-the-go recording and synthesis/sound design system, and, as touched on earlier, uniquely capable live performance platform, hosting a wealth of interesting and quirky instruments, effects, sequencers and other virtual gadgetry.

Ultimately, if you’re at all serious about music production, you really need a ‘proper’ computer – ie, for our purposes here, the MacBook Pro – primarily because the iPad Pro’s prosumer-focused software ecosystem can’t hold a candle to the wide array of professional-grade applications and plugins available on macOS and Windows. That’s not to say that the ’Pad doesn’t serve a role in (and away from) the studio, just that it’s best approached as a useful adjunct to your studio Mac or PC, rather than a replacement for it.