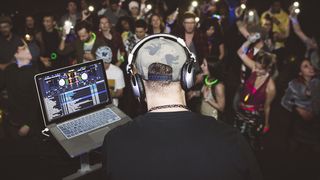 In the early days, if you wanted to become a DJ you’d need two turntables and a mixer. You’d also need to invest time in learning how to ‘beat match’ - the technique used to get two vinyl records playing in sync.

The arrival of digital DJing technology totally changed this, making the process of becoming a master mixer considerably easier, cheaper and more accessible than ever before.

However, with a multitude of options and possible setups out there, it can be a confusing working out how to get started. Let’s tackle some of the big questions...

What software do I need?

For the past decade the DJ software market has been ruled by two major players: Traktor, from Native Instruments, and Serato. While there are differences to the look, feel and style of these applications, they’re actually pretty similar in terms of what they can do. The current versions – Traktor Pro 2 and Serato DJ – both let users organise and prepare music, mix with up to four decks, slice and loop sections of tracks, trigger samples and manipulate effects. Both can analyse your tracks to tell you what musical key and BPM (i.e. tempo) each song is, as well as automatically sync any song to match the track that’s currently playing.

The only significant feature not present in both is Traktor’s Stems deck. Stems is a music format developed by Native Instruments whereby users can purchase music that can be played in four individual parts - typically vocals, bass, drums and melody - which can be mixed and manipulated separately. NI have a free app that producers can use to turn their own tracks into Stems, giving producers a neat way to get creative with their own music during DJ sets.

Traktor Pro 2 and Serato DJ Pro are similarly priced, the former at €99, the latter $99. Serato offer a free version, Serato DJ Lite, which has a limited feature set, but still has all the tools you’ll need to get started and learn the basics. Traktor can be downloaded for free and used in demo mode, but only for 30 minutes at a time.

A more recent, but significant, addition to the DJ software market is rekordbox DJ from Pioneer DJ. rekordbox has a existed for over a decade as a tool for users of Pioneer DJ’s CDJs to analyse and prepare music before transferring it to a CD or USB stick. However, with the launch of rekordbox DJ in 2015, Pioneer expanded the software to incorporate full playing and mixing functionality.

rekordbox DJ is excellent, although it’s heavily influenced by Traktor and Serato, offering a similar set of features and a style that borrows from both applications. Priced at $129, rekordbox DJ is slightly more expensive, but its big selling point is that tracks analysed and prepared in its library are also ready to go for use with Pioneer CDJs, which are the industry standard in clubs. rekordbox DJ also features an Auto-Mix feature, which can automatically select tracks, sync them up and blend between them.

Unlike Traktor, both Serato and rekordbox DJ can also be purchased via subscription, the former starting at $9.99 a month, the latter $14.99.

Beyond these big three, there are numerous other options, many of which offer similar levels of functionality at a more affordable price. At the cheapest end of the spectrum Mixxx is worth a look. Not only is this a free download, but it’s also open source and can be run on Linux operating systems (Traktor, Serato and rekordbox are all Windows or OS X only). Algoriddim Djay Pro and Cross DJ, from French developer Mixvibes are both solid options too, each priced around the $50 mark.

Check out The 11 best DJ software applications in the world today for the full definitive list. Our pick of the must-have DJing apps you can get for PC, Mac, iOS and Android platforms.

Finally, it’s worth considering Ableton Live. Technically, Live is not a DJ application but a digital audio workstation (DAW). This means that it’s primarily designed as a tool for producing music rather than playing it. However, it’s with live jamming in mind, and as a result makes a great alternative tool for digital DJs. It can sync tracks, mix multiple channels and sample, and comes stocked with plenty of effects. It’s main downside is the lack of a DJ-friendly library for organising tracks. If you want to produce or remix music as well as play it though, it offers you all the tools you need in one place. A stripped-down Intro version is available for 79 euros - this has all the tools you need to get going, although you’ll likely want to upgrade to the 349 euro standard version pretty quickly.

Current page: What software do I need?

Next Page Do I need any extra hardware?