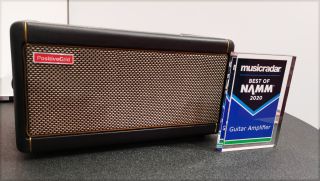 NAMM 2020: The form and functions of backlines are changing for some of us… so much so they can now be at our feet. So it wasn't surprising to see more amp modelling going on in the effects world, and some interesting developments with physical amps too.

Positive Grid's move into the home combo amp market was both unexpected and welcome when they launched the Spark 40 preorder. What might have surprised even them were the 16,000 players and counting laying their money down. But looking at what it offers – is it really such a shock?

We know PG's BIAS modelling is very good so the tone box is pretty much a given tick here. And it's going to be a good buddy for recording as a result. But Positive Grid wanted to go further.

Pairing it with an app adds the ability to transpose chords from streamed music with Chord Detect and it can generate backing tracks for your ideas in the genre style of your choice with AI Jam – this is the kind of thing that keeps people playing and inspired.

What a nice surprise this was – accompanying the British icon's two new bass releases, Orange left it until the show to announce its first guitar pedal amp. And it sounds great!

A good price too – £149 / $199 for a ECC83 valve-driven preamp combination of the Micro Terror and Micro Dark into a small stompbox.

It's a hybrid affair with the power section 20-watt solid state. Orange claims the Terror Stamp will be able power a 4x12 cabinet, if needed. On past form for portable power, we wouldn't dare doubt them.

Of course, the good old valve amp isn't going anywhere fast – and Laney are celebrating it with its promising new Cub iterations; a popular amp updated for the modern era. Sounds good to us!

The  single channel series has been redesigned to create the Super range and starts with the Cub Super 10 (a 10-inch speaker, 12-watt amp) and works up to the 15-watt Cub Super Top head. Apart from the new look there's a footswitchable boost too. Valves are 12AX7s in the preamp and EL84s in the power amp.

Hear them for yourselves…

"We knew we could design a superb sounding amp that wasn’t compromised by a lack of power, lifeless tone or burdened with endless options that you never use," says designer Martin Kidd.

It certainly doesn't compromise; the Duchess V4 has an all-valve preamp, with its own 180-watt class D power section

"The result is a simple, professional-grade guitar amp that you can take anywhere," says Kidd. "The front end takes your drive pedals exactly as you want it to, there’s an effects loop, plus on-board digital reverb and tremolo for ambience."

Chris Buck is one player who uses a full Duchess head, and a great player at that, so it made sense to ask him to demo it for us…

Acoustic combos don't tend to make the headlines, but when Blackstar turns its attention to one (with the help of Jon Gomm), it's going to be something significant.

"Not changed, not coloured, just your acoustic guitar – louder" is the mission statement from the British company.

The amps feature Bluetooth streaming, simple high pass and brilliance controls, and an innovative stand for angling them.