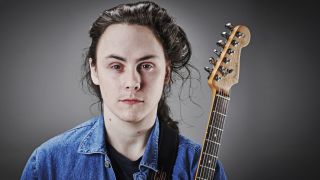 Chris Buck being voted the best blues guitarist of 2019 proved two things that we're very happy to see – his soulful playing is connecting with more people every day, and blues fans are open-minded in showing their appreciation for newer players. We spoke to Chris to get his reaction and talk about what it means to make a living as a professional musician in today's industry.

Firstly, how does it feel to win a poll like this voted by readers?

"Utterly surreal, if I’m honest. Just to be nominated was a shock but the prospect of winning genuinely hadn’t even crossed my mind.

"The idea of ranking your favourite musicians will always feel a little alien to me but seeing my name in such esteemed company isn’t something I'll ever complain about!"

Why do you think people connect with your playing?

"Honestly, I’m not sure. I don’t think that’s for me to know or to necessarily try to understand though.

"All I’ve ever wanted to do is to create music that if nothing else, I would want to listen to. It’s then just a case of hoping other people have similar tastes to you!"

What were you highlights for 2019?

"I don’t tend to dwell on things too much - I’m invariably too busy focusing on something that’s just around the corner - but in retrospect, releasing Buck & Evans' debut album and seeing it climb the top 10 of the Amazon rock chart was a special moment.

"Selling out the 100 Club in London so quickly on the accompanying tour will live long in the memory as well. It’s been a fun 12 months."

Clearly the internet is vital to getting the word out about players now and has enabled you to reach a worldwide audience, but it's not just a matter of posting some videos every week - how much day to day work is involved for you to have a career as a full time musician?

"In some respects, it’s 24/7. Not just physically, but mentally - hardly a second goes by when I’m not thinking about ‘work’ in one way or another. It’s a small price to pay for doing something you love though and I wouldn’t change it for the world.

"The last few years have also cemented the importance of having at least a fundamental understanding about most aspects of the industry; being self-sufficient on any level is a hell of a lot of work but it gives you a better appreciation of what goes into running a band successfully.

"The more you hand over to a third party without fully understanding the potential ramifications, the more you open yourself up to being a casualty of what can be a fairly unscrupulous industry. No one cares about your career as much as you do."

What would be your advice to a young player that wants to make it a career?

"You really have to love what you’re doing because you won’t last long unless you’re doing it for the right reasons. For those that succeed, being a musician is more than a career choice; it’s a compulsion that never leaves you, even at the moments where there are infinitely safer paths to take.

"Your perception of what it means to be a successful musician will constantly evolve and if you’re doing it for the right reasons, you’ll always find a reason to keep going. It’s my experience though that, more often than not, talent, perseverance and sincerity are invariably rewarded."

What are your hopes for 2020 with Buck & Evans and your own journey as a musician?

"To keep evolving as a musician and to reach more people with my music, be it recorded or live. The Write A Better Day tour has exceeded all our expectations so far and has given us a great start to 2020.

"When so much work has gone into an album and tour, it’s important to harness the positivity it generates and use it to give you a renewed sense of purpose."

And finally, you recently bought a '62 Strat, how is the work on it going?

"Aha! Slowly, but that’s a conscious decision - I know very little about guitar maintenance (my Strat’s missing tone knob will attest to as much!) so I’ve handed it over to someone who has access to better materials than duct tape and blue-tac.

"We both have every confidence though that beneath the last 58 years of wear, there’s a fantastic guitar. Either way, it was £1900 well-spent!"