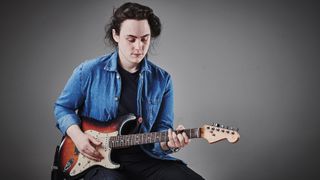 Best of 2019: Every time we think we've got the blues pegged someone will come along and shake our preconceptions. The idea it's a closed shop and its heroes are already determined is about to get blown out of the water…

So the usual suspects are here, but the wide and wonderful world of the blues is clearly opening minds to upcoming names. And that's a hugely positive development because this a is a genre that's survival will depend on new players to take it forwards.

If the measure of a player is how distinctive they are within just a few notes, Chris Buck is someone very special indeed. He's clearly resonating with you as he's made the top of this list without a back catalogue beyond his recent debut with Buck & Evans.

There's no hype train here. Buck a young player who is working hard and passionate about his music. That speaks volumes. But his fluid style really sings loudest with an sense of emotion that takes on a vocal quality. He's got the touch, he's got soul, and we can't wait to hear where he goes from here.

Last year's winner still rides high – and as well he should. Few are working harder than Mr B at being the best player they can, and few are as generous with their praise for their inspirations . After all, Joe recently called Eric Gales the greatest blues player on the planet.

We still think he's a safe bet for that himself and in an unusual year where he didn't release a new studio album, he still proved to be one of the biggest live blues draws on the planet.

“Best tip for live sound? Turn the amp up!”

There's an ongoing theme with these players that goes beyond the blues; hard work ethic. They're relentless in a mission to win hearts and minds the old way; the best way. Fish and her band are clocking thousands of miles on the road, and that sense of what listeners respond to feeds back into her music.

Kill Or Be Kind is a distillation of that and her versatility as a writer and potent player, but you need to see Samantha Fish live for the full effect.

Guitar players argue about so many things but we can all agree Derek Trucks is an Olympus-level player. The fact he's a humble guy too only sweetens the deal.

He summons a voice from guitar that seems tapped into a higher plain. Latest Tadeschi Trucks Band album Signs found him taking it to a more reflective place that only heightened his tense of taste and restraint. A true bluesman who refuses to showboat, only enhance.

Martin Harley on Weissenborns, lap steel tips and how Nashville changed his playing

Harley has put years and thousands of gigging miles into this; it shows in every note he plays. A supreme slide player, the Brit has absorbed influences from his travels far and wide to become a world class musician.

He's transitioned between lap steel to electric bottleneck with ease on new album Roll With The Punches; continuing his restless story with the blues we're keen to follow.

5 guitar tricks you can learn from Gary Clark Jr

The Austin musician would never settle for the bluesman tag, but however he moves into different genres with his songwriting his playing heart is all about it. His notes carry weight – and he uses that power with authority, but he's a player willing and able to buck tradition.

Latest album This Land is not a place for heroic guitar breaks; the guitar adds much more in the textures and atmosphere is creates in the songs.

What a joy to see Eric Gales play – there were many smiles in the room at the UK Guitar Show while he held the room in the palm of his hand back in September. There's a sense the Memphis man is going to have a landmark year in 2020 with a Bonamassa-produced new album. But he wasn't exactly coasting in 2019.

The Bookends proved he's in a prolific creative period, even by his standards. There's a tale of redemption with Gales, but it's really a backstory to the incredibly complete player he's been for years.

Christone 'Kingfish' Ingram: “I can’t be the kid wonder forever”

The internet has given the blues a gift; the sensation – huge exposure to remarkable players through sharing. A supercharged word of mouth. So the world got to know 20-year-old Christone Ingram back when he was a teenager and it takes about a minute of watching him play on Youtube to fall under his spell.

His 2019 debut confirms a young man with an old blues soul. He's got the devine vibrato that recalls BB, and a purity in his love and absolute commitment for everything he plays that reminds us what the blues can be.

Kenny's stayed at the top of the game for good reasons. The Traveler was a reminder in case you needed it. It showcased a player who sees himself as part of a bigger picture, confident and able to step back as the compositions demand.

It's that role as a band player that marks KWS as such a draw live. He'll deliver fire and heartbreaking leads when the time calls, but moreover he's helping to craft memorable songs.

Is Laurence Jones the hardest working bluesman in the UK? He's definitely setting the pace, and the seventies strut of 2019's Laurence Jones Band album was a real landmark for the young musician.

We have to give props to the superb musicians that join him on the record – former bassist Greg Smith, drummer Phil Jones and hammond player Bennett Holland bring so much to these songs. But Jones has stepped up vocally, as a songwriter and most of all, as a player who balances muscular breaks with taste.