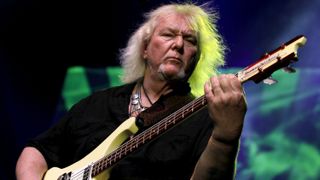 The bassist was diagnosed with acute erythroid leukaemia in May, a condition for which he was receiving treatment up until his passing on 27 June.

Squire was known for his melodic bass playing and distinctive Rickenbacker growl - he was the only member of Yes to perform on all of the band's albums, after founding the group in 1968.

The band issued the following statement on Squire's death: "It's with the heaviest of hearts and unbearable sadness that we must inform you of the passing of our dear friend and Yes co-founder, Chris Squire.

We were lucky enough to catch up with Chris in 2012, when he discussed his long career with Yes, his relationship with Rickenbacker and more.