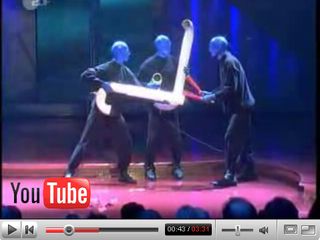 Blue Man Group and their drumbone

Every week, MusicRadar trawls YouTube for the good, bad and ugly music clips you really must see. In this roundup, you have everything from a Bon Jovi song sounding good to Muppet drumming.

1. Bon Jovi´s Livin´ On A Prayer acoustic version
Excellent. And no JBJ anywhere. And more: here´s a tribute to the cover version from guitar prodigy Sungha Jung

4. Gene Simmons bass solo
For all the $millions Gene Simmons has made from Kiss, this probably accounts for 5 cents.

5. Bootsy Collins bass solo
MusicRadar just digs his star-shaped bass, to be honest. And his cape. Oh, and the man in a nappy/diaper.

1. A brief history of arpeggiators
Spectrasonics´ Eric Persing takes us on an entertaining tour of the arpeggiators in his vintage synths - then focuses on the one in his company´s forthcoming Omnisphere.

2. Nintendo DS as MIDI controller
We´re all getting stupidly excited about the prospect of the Korg DS-10, but how about using your DS to play your computer´s synths?

4. Goldfrapp plays theremin
Current hit album Seventh Tree has a folky ambience, but Goldfrapp have always loved their electronic gadgetry. See Alison tear it up on the theremin at the end of this 2003 Top Of The Pops performance.

5. Jamie Lidell on Max/MSP
The Warp artist explains how he uses Cycling 74´s amazing software to help him with his highly acclaimed live shows.

1. Blue Man Group playing the drumbone
The instrument seen on the famed Intel Pentium 4 ad being played live at the Berlin Music Awards.

5. Drum‘n´bass master KJ Sawka
KJ Sawka, the drum ‘n´bass ‘guru´, uses all manor of acoustic and electric drumming techniques live. Here are two videos of him in action.
Live drum ‘n´ bass drumming on radio - KJ Sawka plays along with a groovebox.
KJ Sawka in his basement - improvising some jungle and d´n´b beats.