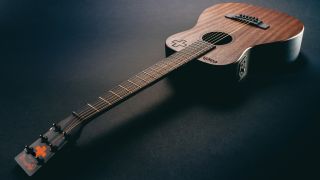 UK availability is scheduled for October-December 2013 with a SSP of £499, with a portion of the proceeds from the sale of each instrument set to go to charity. Expect demand to be high - when this model was officially announced, traffic from many thousands of Ed Sheeran fans crashed the Martin website! Find your nearest UK Martin dealer here and read on for the official press release.

Get TG230, featuring an in-depth interview with Ed, for just 69p from Apple Newsstand until Sunday 14 June 2013.

"CF Martin & Co is gearing up for an exciting summer music season with the announcement of their newest Artist Signature Edition from the Custom Shop - the LX1E Ed Sheeran Signature Edition! Designed in collaboration with the Grammy-nominated, multi-platinum singer-songwriter, and brand ambassador, the LX1E Ed Sheeran Signature Edition features Ed's personal artistic details on the headstock, including his signature fluorescent orange '+' plus sign and 'est. 1991', which represents the name of his platinum-selling album and year Sheeran was born respectively.

"Additionally, the '+' plus sign logo is laser-etched on the solid sapele top, which signifies the title of his platinum-selling debut album. A portion of the proceeds from the sale of this model will be donated to East Anglia's Children's Hospices, a UK-based charity Sheeran supports and is passionate about. The organization, whose Royal Patron is The Duchess of Cambridge, supports families and cares for young children and young people with life-threatening conditions and provides services across several UK counties, including Suffolk, where Sheeran was raised.

"It was a huge privilege to have the opportunity to collaborate with Martin Guitar," said Ed Sheeran. "I have been a fan of Martin since I started playing guitar and songwriting, and I am honored to have a Signature Edition that bears my own personal imprint. All of the royalties from every purchase from my Signature Edition will go to the East Anglia Children's Hospices. I can't wait to get on stage and perform with it for my fans - I hope they enjoy my new Martin as much as I do!"

"We are so proud to have such a prolific and credible artist as Ed Sheeran join the Martin Guitar family," said Amani Duncan, Vice President of Brand Marketing for Martin. "One of our marketing objectives at Martin is to spread our dynamic culture, history and brand to new consumers worldwide and Ed is the perfect Ambassador to help us achieve this. We cannot wait to present our latest collaborative Artist Signature Edition to his fans and ours across the world this summer."

"We're absolutely delighted that EACH will benefit from the sales of this special guitar and we'd like to thank Ed, CF Martin & Co, and absolutely everyone involved in the project," said Graham Butland, EACH Chief Executive. "Not only will the guitar raise much-needed funds for the charity, but will also greatly raise the profile of EACH and the vital care and support we provide to life-threatened children and their families."

"The LX1E has been Ed Sheeran's guitar of choice since his early teens. In the span of just two years, Sheeran's career has catapulted him from a rising star in his native UK, where he was nominated in 2012 for multiple music awards and won two Brit awards, to global success including a massive fan base and critical acclaim in the US. Sheeran and his favorite LX1E Martin guitar have also graced prestigious stages worldwide, from the London Summer Olympics opening ceremony in 2012 to the 2013 Grammy Awards, teaming up with Sir Elton John.

"Following an industry unveiling at Summer NAMM on July 11, Ed Sheeran will unveil his LX1E Ed Sheeran Signature Edition to his US fanbase when he performs on the Today Show Summer Concert series on Friday July 12. Fans can catch Sheeran and his new Martin model on the road through the end of 2013 with tour mate Taylor Swift."