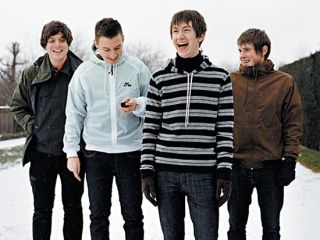 Arctic Monkeys laughing all the way to the studio. And bank.

Despite Arctic Monkeys' front man Alex Turner's busy schedule with his Scott Walker-inspired side project The Last Shadow Puppets, the Sheffield band are hitting the studio for album number three. Simian Mobile Disco (SMD) man James Ford is back at the helm as producer, after twiddling the knobs on sophomore effort Favourite Worst Nightmare.

Although rumours that SMD's fellow dance troop (and some-time collaborator) Justice were working with Red Hot Chili Peppers came to nothing, this appears to be official. James Ford spoke to UK rag Daily Star about the collaboration: "It's probably too early to say what sort of direction they'll [Arctic Monkeys] go in next. It's much more psychedelic than the first album".

Ford, who was also responsible for Klaxons' Mercury Music Award winning Myths Of The Near Future, added: "I wouldn't rule out a bit of R&B either - the boys know their stuff".