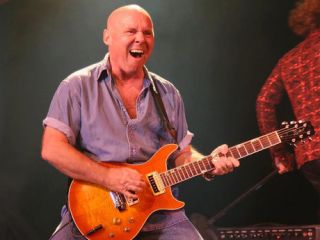 When guitar legend Ronnie Montrose was found dead at his home in Brisbane, California last month, it was assumed that he had succumbed to complications from prostate cancer, which he had battled since 2007. But a report by the San Mateo County coroner, released on 6 April, rules his death a suicide.

Montrose, 64, was discovered in the living room of his home on 3 March holding an unregistered .38-caliber revolver. He was pronounced dead at the scene. An autopsy has revealed that his blood-alcohol level was at 0.31-percent when he died - nearly four times the legal limit in California.

In a statement on Montrose's official website, the guitarist's family said the following:

"By now, the devastating truth of Ronnie's death is public knowledge. We hope you can understand why we wanted to keep this news a private family matter for as long as possible. We can only hope that you will choose to celebrate Ronnie's life, and what his music meant to you, rather than mourn his passing. Ronnie would have wanted it that way.

"He loved being a guitarist, a composer, a producer, and a creator of magic. He fully understood his gifts, and yet he constantly pushed himself to evolve, improve, and make better music. He did this for himself, and he did this for you, because he adored and appreciated his fans. Please keep his energy, his joy, and his love in your hearts."

The guitarist left no suicide note, but his wife, Leighsa, in an interview with Michael Molenda of Guitar Player magazine, said that he struggled with depression all of his life. "Ronnie had a very difficult childhood, which caused him to have extremely deep and damaging feelings of inadequacy," she said. "This is why he always drove himself so hard. He never thought he was good enough."

As an adult, Montrose's problems included alcohol. "I knew I had married an alcoholic, but Ronnie was never anything but loving," said Leighsa. "He could be curmudgeonly and cranky, but he was never angry or abusive to me in any way... He'd always say that I got the best version of himself."

According to Leighsa, Montrose was badly shaken by the deaths - three weeks of each other - of his beloved bulldog, Lola, and his uncle in January 2012. His depression became worse, and on the day before his death he had been drinking heavily.

On 3 March, the guitarist sent Leighsa, who was working in her design studio, a series of texts hinting at suicide. At first, she thought he was indulging in dark humor. It wasn't until he texted "I'm so sorry. Still have the gun in my hand. I'm going on that voyage. I love you beyond measure" that she knew something was seriously wrong. Along with her mother, Leighsa rushed home, but by that point it was too late. The two found Montrose seated in a recliner, the revolver in his hand and his cell phone at his feet.

"I told him I loved him," Leighsa said. "I accepted what had happened. And then I sat calmly on the couch and called the Brisbane Police Department."