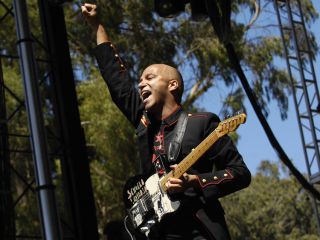 Morello's got a guitar and he's learned how to make it talk (Image credit: © Jared Milgrim/Corbis)

Tom Morello, guitarist for Rage Against The Machine and Street Sweeper Social Club, likes to stir things up. Hot off the heels of his stunning win for the No. 1 Xmas single in the UK with Rage's Killing In The Name, the modern-day Pete Seeger is looking to throw the 2010 NAMM Show for a loop.

Morello and System Of A Down frontman Serg Tankian (both partners in the Axis Of Justice) are joining representatives of Korean guitar workers in a protest against Cort Guitars, whom they say fired all of its Korean workers and closed all of its Korean plants in 2007 to "avoid paying proper wages" and to "fix deplorable working conditions."

Cort has been the Korean equipment manufacturer of popular American companies like Gibson, Fender and Ibanez.

"Guitars should be a means to liberation, not exploitation," said Morello. "I fully support the Korean workers' demands for justice in the workplace. All American guitar manufacturers and the people that play them should hold Cort accountable for the awful way they have treated their workers. Without us, they go out of business. Simple as that. No one should have their job taken away because they stand up for their rights."

Morello told MusicRadar that he recently called Fender to make them aware of the situation. "They didn't seem to have any knowledge that this had gone on," he said. "I would think that if the people at Fender, Gibson and Ibanez step up, they can help fix the matter."

According to Sukjong Hong, US Coordinator for Cort Action, who sent a letter to Fender on behalf of Cort and Cor-tek Guitar Workers, along with the Korean Metal Workers Union, "Fender indicated that they were taking the matter very seriously and would conduct an investigation." Hong said that a meeting had been set with Fender representatives for this Sunday, 17 January.

Morello, both as The Nightwatchman and in a Street Sweeper Social Club acoustic performance, will headline a protest concert to be held tonight (13th January) at the Nanum Cultural Center in Los Angeles.

"I've even written a brand-new song for the occasion called Worldwide Rebel Songs," he said. "It's a number about international solidarity and a reminder that we're all in this together."

When asked what kind of guitar he would be playing for the concert, Morello chuckled and said, "I'm definitely going to be performing with a guitar that was made when all of these good people were fully employed,"

MusicRadar has contacted Cort Guitars for a response to this matter. As of press time, no calls have been returned.