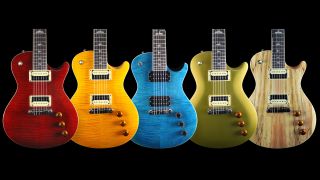 The PRS SE Bernie Marsden has been a roaring success for the brand since its 2012 launch, and the addition of five new finishes looks set to further broaden its appeal.

When we spoke to Bernie recently and checked out the highlights of his enviable collection of vintage instruments, the former Whitesnake guitarist said this of his PRS SE: "I wanted to have a [signature] guitar that guitar players could come up to me and say, 'I've got one of your guitars because I can afford it.'

"A lot of people I know - and I know this because they send me emails or they come to gigs and we talk after shows - have bought it as a second guitar and it's very rapidly become their first guitar. They're just all knocked out."

"PRS Guitars Europe has announced the arrival of five limited edition colour options for the popular SE Bernie Marsden signature model. One of the most vintage-styled and classically-voiced of all the guitars in the SE line-up, the guitar has won rave reviews for its thick, authoritative rock tone and superb playability since its introduction as a standard production model in 2012.