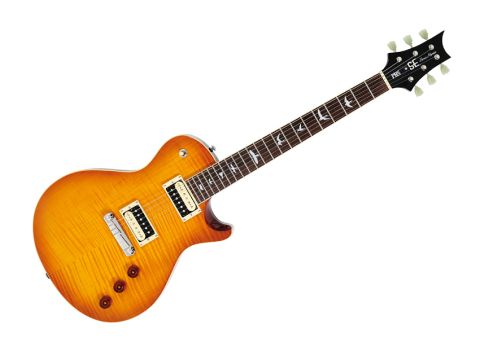 If you like your single-cuts rooted in the fifties, you'll like this. It may only be subtly different from the 245, but it's enough.

In PRS's Korean-made SE line, the Singlecut has fared better than its US counterparts - over 50 per cent of SE models are based on it.

Here too the guitar has evolved from the initial Mark Tremonti SE Singlecut, with its thinner body and 635mm (25-inch) scale, to guitars such as the SE 245 with its more original Gibson-like 24.5-inch scale (hence its name) and body thickness that's a shave under the USA Singlecut's Les Paul-like girth.

"Informed by the past it might be, but the PRS Singlecut is its own beast and it's the consistency of build and QC that still impresses after all these years."

Into this throng comes the latest SE Singlecut: the Bernie Marsden. Bernie is of course the ex-Whitesnake tonemeister and a relatively recent PRS convert (a big coup for the firm considering his original 1958 Gibson Les Paul, aka The Beast, is almost as well known as he is - see p64 for more on it). The guitar was originally a 1,000-only limited run, but quickly became a standard model due to large demand.

At a quarter of the price of the Stripped 58 we tested at the same time, the 24.5-inch scale Bernie Marsden (BM) is among the most vintage Les Paul-like Singlecuts in the SE range. It has a thick body, 'bevelled' veneer-faced solid maple tops (think a subtle carve not the more pronounced carve of the USA models), a Wide Fat neck shape, Stoptail bridge and dual 245 humbuckers.

The BM goes for real body binding (a first for a PRS production model we believe); it also has edge binding to the fingerboard and old-style vintage tuners on a black-faced headstock.

SEs are very different from the USA models, as the prices clearly indicate. They use standard parts such as strap buttons, jackplates, knobs and pickup surrounds.

Yet the bird inlays and Stoptail bridges are more than enough to differentiate them from virtually any other Les Paul-inspired single-cut design out there. That said, we think the pegheads look too busy with the PRS logo on the truss rod covers and the SE and model name on the headstock faces.

There are, of course, numerous actual differences aside from those more obvious ones. The SE's Wide Fat neck remains one of our favourites, big but not huge in the hand, but the re-jigged USA Pattern profile of the Stripped 58 has slightly more of a 'V' and just feels more boutique in the hand.

The slightly bigger fretwire on the USA models is a similar difference. In short, any reasonably experienced player will not only see but feel the differences immediately.

With the BM things seem plenty vintage before we plug in. That neck and body binding, the slightly washed out 'burst, those zebra coils… None of which should make a difference.

So why are we hearing a more classic vintage sound than we're used to from a standard SE 245? It's a small difference, but it's the kind that makes you choose one guitar over another. The neck pickup seems to have a bit more plumminess, the bridge has clarity with just a little less scratch.

Maybe those tuners, the different nut or heavier string gauge (the BM is shipped with 0.010s, the 245 with 0.009s) are playing their part, but the BM just has a little more roundness to it: it just sounds a little older.

We know PRS makes great guitars but the interesting thing about this test, especially using a 2001 Singlecut as a reference, is the progression over a 10-year period. A new SE 245 is frankly almost as good as that first Singlecut; the Bernie Marsden is quite possibly better.

If you don't like bird inlays or those fancy tops you might pass in favour of a classic Les Paul. Yet informed by the past it might be but the PRS Singlecut is its own beast and it's the consistency of build and QC that still impresses after all these years. That, sadly, can't be said of every company in the world building single-cuts.

The SE 245 is already a go-to single-cut worthy of honest evaluation in your search. The Bernie Marsden is a still vibe-ier guitar - subtly perhaps, but it's noticeable.