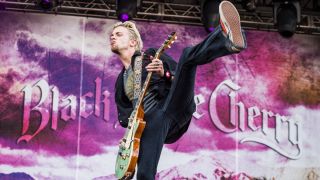 Def Leppard and Whitesnake's December tour got us thinking, who will provide the next generation of arena rock anthems? Well The Carnival Of Madness offers three prime candidates, and they've brought promising Cape Cod trio Highly Suspect for the ride, too.

While they might not be at Leppard level yet, to anyone who has been watching these three young US bands build fanbases on UK shores through hard touring graft, it makes sense. None more so than headliners Black Stone Cherry.

"We're pinching ourselves trying to take it all in," beams guitarist Ben Wells on the thought of an arena tour. "We've been playing over here since 2007, two or three times a year, building and building. It's really starting to show that the fans over here are latching on to what we're doing."

The band have put so much time in, they now have a duplicate rigs in the US and Europe, which means double the Les Paul Classics and Peavey 6505s for Ben, and PRS guitars and amps for Chris Robertson, who moved to the Maryland company's Archons on their last record, Magic Mountain. Ben's hoping to have its follow-up completed by the time they start the tour, with a new song out then, too.

"It's pretty heavy, pretty rocking," he reveals. "Even more so than what we've done in the past. It's super riffy; Southern and nasty. We're not trying to write for radio or write to be commercially cool, we just want to be us."

So far that's been a winning formula. But it turns out their future tourmates are fans who might have had a hand in Black Stone Cherry getting noticed in the first place.

"I think Shinedown are one of the reasons they got signed to Atlantic," reveals guitarist Zach Myers. "Brent [Smith, vocals] and Jasin [Todd, ex-Shinedown guitarist] championed them. They're the best guys in the world, and we've done not shy of 10 tours with Halestorm."

It sounds like a love-in with the bands, then. But what about the fans? It seems that nobody will feel out of place in the crowd if the usual BSC gig is anything to go by.

"It's cool because we see a lot of young kids at our shows," says Ben. "Then we see their parents with them. We also see the older classic rock people… even the metalheads. It's a really cool balance, I don't know how we've done it, but somehow we have!"

"It's amazing," adds Zach of the UK embracing all three bands. "That's why I think this is going to do so well. It's a great night of rock 'n' roll - there's no fluff."