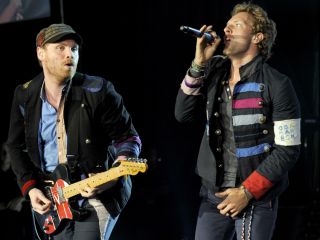 Jonny Buckland and Chris Martin will serve no album till its time...which means not this year (Image credit: Tim Mosenfelder/Corbis)

Bad news for Coldplay fans is good news for non-fans. Although members of the band were promising to have a new album in stores by the end of 2010, it's now looking as though Chris Martin and co will be toiling away on their next release until sometime in 2011.

During a fan meet-and-greet event in London yesterday, Martin said that much work lay ahead of the group. According to the fansite Coldplaying.com, "Chris said that although they are close to finishing lots of songs, they have not actually finished anything at all yet." (This apparently includes the song Wedding Bells, which Martin recently played at an Apple Computer event.)

Coldplay's former manager Phil Harvey had even more rotten news for the group's fans.The man described as 'the fifth member of the band' said that, although the group's tour for their previous album Viva La Vida Or Death And All His Friends began immediately after the record's release, Coldplay will take a little more time between the release of the unnamed fifth album and the start of their next tour. Although no specific dates were mentioned, there is a possibility Coldplay won't hit the road until 2012.

All of which isn't music to the ears of EMI, currently struggling with massive debts. The label's owner, Terra Firma, was counting on a 2010 release from Coldplay to ease their cash flow problems.