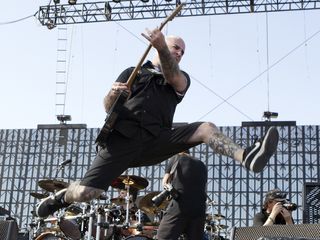 NAMM 2015: While the daytime of the NAMM show in Anaheim is all about new gear at the convention centre, the night finds special gigs happening around the city featuring all manner of stars from the rock and metal worlds. And Metal Allegiance is set to be one of the highlights.

Kicking off at the House Of Blues on 21 January, the all-star collection of musicians that is Metal Allegiance are following up their debut show on Motörhead's Motörboat in September with an even bigger cast.

The revolving line-up will play classics from the likes of Black Sabbath, Judas Priest, Iron Maiden and Kiss with a segment of the show dedicated to Van Halen's classic debut album. And the good news for those who can't make the show in person is that site The Music Zoo will be streaming the gig live.

"What better way to kick the new year in the f•••••• ass than with a Metal Allegiance show?" says new recruit Rex Brown. "If you can't get your ass out to Anaheim, get it in front of a computer and head over to The Music Zoo's website to watch it all go down."

The opening act of the night is none other than Anthrax's riffmeister Scott Ian with Speaking Words, his touring show recounting his stories from the road and life in Anthrax.

Tickets for Metal Allegiance are $29.50 in advance/$32.50 day of show and are on sale now. They can be purchased via Ticketmaster at or at the House Of Blues Anaheim box office.

Check TheMusicZoo.com for the stream of the show on the night.