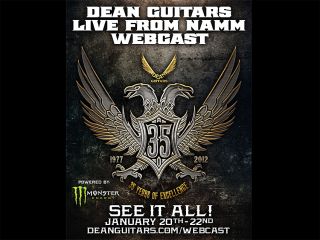 Dean is celebrating 35 years in the business at NAMM 2012

NAMM 2012: Although many of you probably haven't finished the leftover Christmas turkey yet, it's full steam ahead for the big guitar companies as the most important event in the MI industry calendar looms large.

Dean Guitars always pulls out all the stops at NAMM, and this year looks set to feature more fireworks than ever as the company celebrates 35 years in the guitar game with a 'Live From NAMM' HD webcast, massive NAMM Jam party and new limited edition instruments. Here's the official skinny:

"For 35 years Dean Guitars has been making sought after instruments that have been seen on the biggest stages in the world. From ZZ Top's fuzz-covered Dean Z's, Sammy Hagar and his 'Red Rocker' ML, Dimebag Darrell's legendary Dean From Hell to Dave Mustaine and his Dean VMNT at the epic 2011 Big 4 concerts, Dean guitars has created an undeniable legacy that has been embraced by guitar enthusiasts worldwide.

"Dean Guitars is the only company to date to give the global guitar community an all-access ticket to NAMM with a multi-camera, real-time HD webcast. Exclusive technology partnerships with Livestream.com and Newtek Tricaster will allow viewers to interact via Facebook and Twitter with the Dean crew. (Over 100,000 viewers from 23 countries watched the 2011 Dean NAMM webcast!).

Check out the video at the top of this page for a taster of what to expect, meanwhile, for a sneak preview of some of the new Dean guitars that are set to be launched at the show, head over to I Heart Guitar.

To read more of the latest pre-show rumours and announcements, check out our NAMM 2012 round-up for the story so far.