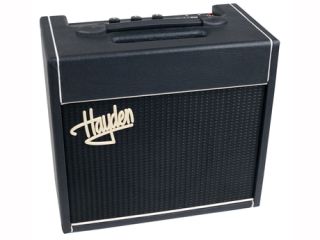 Frankfurt Musikmesse 2012: Making its debut was the irresistible High Five, the new five-watt all valve guitar combo from Hayden Amps.

"High Five is a saying we have all become accustomed to over the years, 'It just suited this cute little combo,' Hayden's Lee Alexandercommented on its conception.

"For those who want to spend more time playing and less time tweaking controls trying to find a tone the Hayden High Five is a five-watt all valve guitar combo rich in tone and response that harks back to simpler times with just bass, treble and a volume control delivered via a single 10-inch speaker in a beautiful retro styled cabinet.

"Players as diverse as Jesse Hughes and Dave Catching from The Eagles Of Death Metal, Stevie Salas, Phil Hilborne and Simon Neil from Biffy Clyro have been quick to make their Haydens part of their rigs on stage and in the studio. So naturally we're excited to extend the range with the new, High Five combo.

"Other Hayden artists include James and Tom from Pulled apart by Horses, Barry McKenna from Twin Atlantic, David Cartwright from All the Young, Drew Elliot from Spy Catcher, Carl Barat from The Libertines as well as Ryan Burnett from The Crave to name but a few."

Check out the official Hayden website for more info.