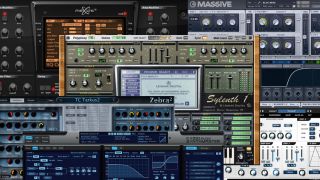 There are a lot of plugin synths out there, but we were only interested in the best...

If you're a computer musician you'll know that there isn't exactly a shortage of plugin synths on the market, so in March we attempted to whittle down the huge number that are available to the 39 best.

Tech fans also went mad for our reviews of Ableton Live 9 and Push, and marvelled at ROLI's new Seaboard instrument.

Elsewhere, we marked 50 years since the release of The Beatles' Please Please Me by listing 50 albums that were released in 1963 by acts other than The Fab Four, while bass titan Victor Wooten named his 10 essential four-string albums and producer Bob Rock pondered his 16 career-defining records.

Production legend Bob Rock on 16 career-defining records
"If a record can make you happy or break your heart, then you know it's good"

Billy Sheehan: my top 5 not-so-guilty pleasures of all time
"Keep your mind and your ears open, and like what you like. It'll pay off somewhere down the road."