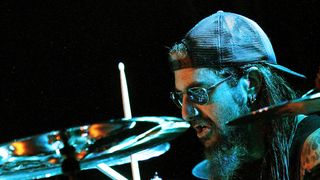 Anyone who's ever played a live set will know that good and bad gigs go with the territory, and in June former Dream Theater drummer Mike Portnoy was good enough to tell us about his best and worst gigs ever.

Elsewhere, we courted controversy by naming eight underrated guitarists (some of whom you said were already highly rated), and Apple announced a new flagship computer, the Mac Pro.

Of course, June also meant Glastonbury. We picked out 30 guitarists to see at the festival (though we wonder if anyone managed to see them all), and Sunday afternoon superstar Kenny Rogers gave us his give festival performance tips.

Mike Portnoy: my best and worst gigs ever
The drum superstar recalls onstage highs and lows

Stewart Copeland picks 16 fun drum albums
"These are bad influences for young drummers. They are a good time, however."