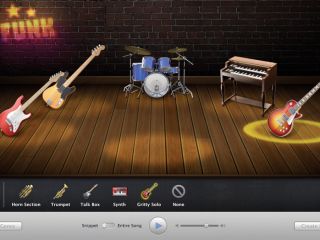 The heroic GarageBand - music-making made easier

"There is good and bad in everyone…" crooned Stevie Wonder on his and Paul McCartney's Ebony And Ivory and the soul genius fella certainly had a point.

As we head towards 2009, MusicRadar has rounded-up the people, businesses and events of 2008 that provided moments of heroism or villainous badness.

Let us know who your heroes and villains are too…

For a while, it looked like a mixture of licensing rules, the smoking ban and Guitar Hero parties would reduce live music to organised office excusions to The O2. No fear. In 2008, people had a world of choice for live music - weirdsville gigs everywhere from swimming pools to submarines, zillions of micro-festivals springing up, mainstream bands getting back on the tourbus (if only because there's no cash in CDs) plus pubs and clubs still giving local bands their first step on the ladder. Like music? Play music? This is your time. Mike Goldsmith

Eighteen years after they originally formed - and still with the original five members - Elbow finally started to sell significant numbers of albums after The Seldom Seen Kid won the UK's 2008 Mercury Music Prize. Industry awards can be grating and pointless, but this gong-show at least one pointed rock fans towards a band of un-glamourous, ordinary blokes who are capable of sneaking extraordinary music under the mainstream radar. They get my vote for heroic perseverance. Michael Leonard

Justice released their debut album - Cross - way back in June 2007, but it's easy to hear why their ultra-clever rock-inspired electro is still making waves in late 2008. And the best bit? They did it all in GarageBand. If you've got a Mac, chances are you've already got Apple's so called 'entry-level' software and you're only a simple tutorial away from being a bit clever yourself. Still not convinced? Ask Oasis or Fall Out Boy, they already know… Tom Porter

For making Day & Age, their best album yet and one of the 2008's most satisfying efforts. More importantly, they did so in a graceful, un-hyped, non-retail-exclusive manner. This is as it should be: a band working at the peak (for now) of their creative powers, surprising us and themselves with songs that will grow exponentially into the thicket of one's senses. Joe Bosso

With the launch of the App Store in July, the iPhone and iPod touch suddenly became viable music-making platforms. OK, some of the stuff that's been released isn't up to serious production standard, but we're already starting to see some really inventive software such as SMule's Ocarina. The App Store is big already, but trust us when we say that's going to get much, much bigger. Ben Rogerson

Over the years I've seen lots of memorable sets at Worthy Farm, but Leonard Cohen's performance at Glastonbury has to be amongst the finest and most moving. The unquestionable highlight came just as the sun was disappearing behind the hills - the 73 year old straps on an acoustic guitar and stuns us with a haunting rendition of Suzanne, followed by the emotional knock-out punch of Hallelujah's crowd sing-along. Simply a beautiful moment. Chris Vinnicombe

Bands who take advantage of fans

Fan clubs should exist for one reason; to serve band's most loyal supporters. Not the Backstage With Jon Bon Jovi fanclub. The basics are this:
1. It's $50 to join.
2. The band's gig in NYC in July was $305 a ticket.
3. The fan club seats came with an extra $75 handling fee.
That's right, a total of $430 for a gig and extra for fan club members.
No wonder Bon Jovi's Lost Highway tour grossed $210m (!) in 2008. Bon Jovi seem sensible enough guys to sort their club out, but for now they're giving fan clubs a bad name. Michael Leonard

It's one thing to be off your rocker, but expecting the world to shut down and buy your unqualified fiasco known as Chinese Democracy? Gimme a break. And then you have the nerve to get all up in Dr Pepper's ass because their giveaway didn't float your boat? How about this: Make a record like Bruce Springsteen's Nebraska. No hype, no knotheaded claims from your manager comparing you to Michelangelo, just put something out and do away with the three-ring circus. I still may not like it, but I'll respect you more. Or a little. Joe Bosso

Or it could be the credit crunch. Or the cheap internet prices. Or videogames. But whatever the reason, my villain of 2009 is whatever it is causing record shops to shut down. Now don't get me wrong, buying online is great but whatever happened to chance? To a lunchtime spent browsing? To taking a punt because you liked the sleeve? No-one's suggesting the nation takes up cratedigging as a national sport but come share with me a Xmas toast for the late lamented record shop. You'll miss it when it's really gone. Mike Goldsmith

OK, AC/DC did themselves proud with Black Ice, but how many other of the numerous comebacks and reunions will live long and pleasantly in the memory? Guns N' Roses' Chinese Democracy was a mess, Queen + Paul Rodgers' The Cosmos Rocks was pointless, and does anyone even remember that The Verve released a record and headlined Glastonbury? And don't even get me started on the tediousness of the Led Zeppelin saga… Ben Rogerson

We're up for inebriated Rock Band or Guitar Hero jamming as much as the next person, but there's something really weird happening when companies are developing controllers that cost the same amount as a real guitar. Take it from us, the real thing may be harder to master, but it's much more fun. That said, while a trawl of the blogosphere reveals plenty of amusing Guitar Hero controller mods, our favourite is the one that Wayne Coyne was rocking back in October. Chris Vinnicombe

Cream's bassist has beef with Led Zeppelin because he claims they "hijacked" the Ahmet Ertegun tribute concert (Zep's first and only reunion since 1995) at The O2. Here are Jack Bruce's thoughts on the subject: "they played one fucking lame gig - while Cream did weeks of gigs. Fuck off, Zeppelin, you're crap." To add insult to injury, he later added: "the only decent guy in that band is dead." Jealousy ain't a good look for a 65-year-old, Jack, so hit the road… Tom Porter