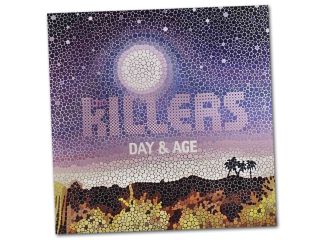 The Killers' Day And Age

Early success can be a bitch sometimes. The Killers have always had a lot to live up to after they came out of the box, fully formed, on 2004's Hot Fuss, an irresistible razzle-dazzle debut.

Hot Fuss will pay Brandon Flowers and company's bills for years to come. Yet it's also an album that could have fans bugging him in restaurants asking: "How come you can't write a song as good as Mr Brightside anymore?"

He wanted to make Big Statements along the lines of Bruce Springsteen and U2 (tellingly, Flood and Alan Moulder, both of whom had worked with U2, helped produce). Sam's Town saw Flowers cranking up the epic storytelling like a man constantly watching The Grapes Of Wrath while Springsteen's The River played in the background.

Such grand ambition can sometimes be folly, especially when scale obscures eloquence. And detractors duly complained that Sam's Town saw The Killers losing the plot.

As a transition album, Sam's Town did some heavy lifting, and at least proved The Killers were not going to rehash the winning formula of Hot Fuss. In interviews, Brandon Flowers even claimed they wanted to be "the next U2."

Here's the thing, though: with Day And Age The Killers exhibit the smarts to pull off that leap into mega-stardom.

Day And Age: album of the year?

The Killers' Day And Age has all bases covered. It captures the emotional anxiety of late 2008 with a startling directness. There's also plenty of rocking, stomping beats to fill dancefloors. And there are melodies to fill your head and invade your soul.

Day And Age isn't just The Killers' best album, it's one of the best records of 2008.

The Killer's Day And Age: track-by-track

Losing Touch
A rousing Bowie-like groove driven by honking saxophones and ping-ponging keyboards that kicks things into high gear. Brandon Flowers' voice is smooth and full as he intones "You made your home/ and you made your way back home/ like a roving vagabond, I'm losing touch." Dave Keuning makes his presence felt with a soaring guitar lead.

Human
A gentle, phased, clicky guitar riff opens this gorgeous nod to the gentle side of '80s new wave. "Cut the cord/ are we human/ my sign is virtual/and my hands are cold/ are we human, or are we dancer?" Flowers asks in a plaintive, melancholy manner. Then the song gallops off into a Cure-meets-U2 arena shaker.

Joy Ride
The best Bryan Ferry song that Bryan Ferry never wrote. A sensuous, funky beat punctuated by Stones-like sax, biting guitars that tear through the choruses and a melody that hooks you on the first listen. The middle-eight is breathtaking. In fact, the entire band seems to grow more energized as the song progresses. Fun stuff.

A Dustland Fairytale
After a delicate keyboard intro, Brandon Flowers' vocals are appropriately fragile. But as the song swells, with jabbing cellos that seque into a double-time rage, he opens both his heart and his throat. This is a large-canvas narrative with a sound to back it up. Flowers' literary chops are developing in an exciting way.

This Is Your Life
African tribal chanting and harpsichord are strange musical bedfellows, but they spin a magical web on this spacey yet thumping track. Dave Keuning's echo-laden guitar combines with Flowers' barbiturate voice for an overall effect that is spellbinding.

I Can't Stay
A delicious Caribbean beat propels this stunner that features sax, harp and a gently strummed acoustic guitar. A song to sit back and drift away to until a dramatic middle-eight makes you bolt upright and go, "Wow!" Steel drums ride the song out in smashing style.

Neon Tiger
With little fanfare, this mid-tempo grinder gets going and doesn't let up. The instrumentation is perhaps the sparest we've heard yet from The Killers, but the middle section is a marvel of dramatic intensity.

The World We Live In
Melodrama that isn't overwrought or cloying is tricky to pull off. But Flowers' heavily affected, double-tracked voice is a thing of strange beauty here. He's developed into a world-class vocalist, full of passion and searching for the kind of truths that only the finest singer-songwriters can. Although the band provides gutsy support, Flowers owns this untamed monster.

Goodnight, Travel Well
Just as U2 concluded their arguable masterpiece, Achtung Baby!, with a descent into darkness on Love Is Blindness, here too, The Killers bring the curtain down with a seven-minute ride into a nocturnal dreamland. Forlorn and ominous, Flowers sings, "The universe is standing still/and there's nothing I can say/ there's nothing we can do now…nothing we can do now." Get ready for a crushing crescendo in which he's on the floor, begging "Stay!/ don't leave me/ the stars can't wait for you!" Drummer Ronnie Vannucci lets loose with a flurry of crashing cymbals that'll leave you breathless and wondering, it is still night or have we reached the dawn?