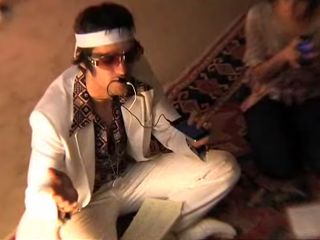 "I can't take your call right now as I'm making a fool of myself."

It's a sight we never thought we'd see: five apparently sane human beings, sitting on a rug and performing a Led Zeppelin classic by blowing into their mobile phones.

This bizarre musical happening was made possible by SMule's Ocarina, an inventive new application for Apple's iPhone.

In fact, this is actually a genuinely playable instrument - notes are 'fingered' by covering the virtual holes on the touchscreen (think back to when you learned to play the recorder at school) and you then have to blow into the microphone to produce sounds.

The ocarina is an ancient flute-type instrument that's believed to date back 12,000 years. More recently, it played a central role in one of Nintendo's Legend Of Zelda games, which explains why the software offers a dedicated 'Zeldarian' mode.

Available now in the App Store for the bargain price of $0.99/£0.59, Ocarina is certainly one of the most interesting iPhone music-making tools we've seen so far.

You can find out how it works (and how to play it) on the SMule website, but first, make sure you check out that Stairway To Heaven video.