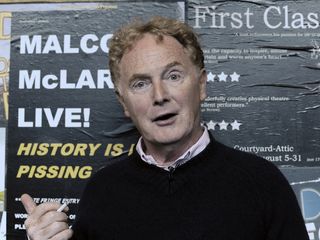 Malcolm McLaren, who once claimed to have invented punk rock, and who assembled and managed the snarling, unruly members of the Sex Pistols, the breakthrough British punk band, has died at the age of 64.

"He had been suffering from cancer for some time, but recently had been full of health, which then rapidly deteriorated," McLaren's spokesman Les Molloy told The Independent today. Molloy confirmed McLaren died in New York this morning; his body will be moved to London for burial in Highgate Cemetery.

A pioneer of the punk movement that swept Great Britain in the mid-'70s, McLaren got his start as a fashion designer in New York City. While there, he became the New York Dolls' manager in their waning days.

Returning to London in 1976, McLaren was determined to start up his own band. With his business partner and girlfriend at the time, Vivienne Westwood, he opened a Kings Road boutique called Sex. It was there that McLaren put together The Sex Pistols.

The band consisted of singer John Lydon (Johnny Rotten), guitarist Steve Jones, drummer Paul Cook and bassist Sid Vicious (who replaced an original member, Glen Matlock). The group proved to be an immediate sensation (especially with a stunt that featured the Pistols performing their hit God Save The Queen on a barge during the same week of the actual Queen's Silver Jubilee), and their album, Never Mind the Bollocks, Here's the Sex Pistols, stormed the charts.

The Sex Pistols then embarked on a tour of the US and, in true punk spirit, split up in a matter of weeks.

Later in his career, McLaren became a well-known musician in his own right. His 1983 hip-hop-flavored album Duck Rock produced the UK Top 10 singles Buffalo Gals and Double Dutch. A year later, he scored another hit with Madame Butterfly, a song inspired the opera of the same name.

McLaren's About Her, a remix of the Zombies' She's Not There, was featured in Quentin Tarantino's Kill Bill, Part 2. His most recent release was last year's Shallow - Musical Paintings.

"For me Malc was always entertaining, and I hope you remember that," John Lydon said of his former manager. "Above all else he was an entertainer and I will miss him, and so should you."